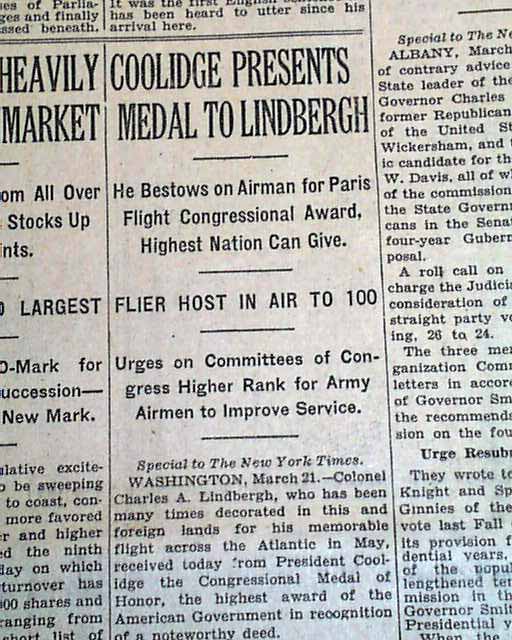 The front page has a one column heading: "COOLIDGE PRESENTS MEDAL TO LINDBERGH" with subheads. (see) First report coverage on aviator Charles Lindbergh receiving the Congressional Medal of Honor from President Calvin Coolidge. More on page 3 with related photo. (see) Always nice to have notable events in history reported in this World famous publication.
Other news, sports and advertisements of the day. Complete in 52 pages, light toning at the margins ,generally very nice.

wikipedia notes: On December 14, 1927, a Special Act of Congress awarded Lindbergh the Medal of Honor despite the fact that it was almost always awarded for heroism in combat. It was presented to Lindbergh by President Coolidge at the White House on March 21, 1928. Other noncombat awards of the Medal of Honor were made to aviators Richard E. Byrd and Floyd Bennett, as well as arctic explorer Adolphus W. Greely.