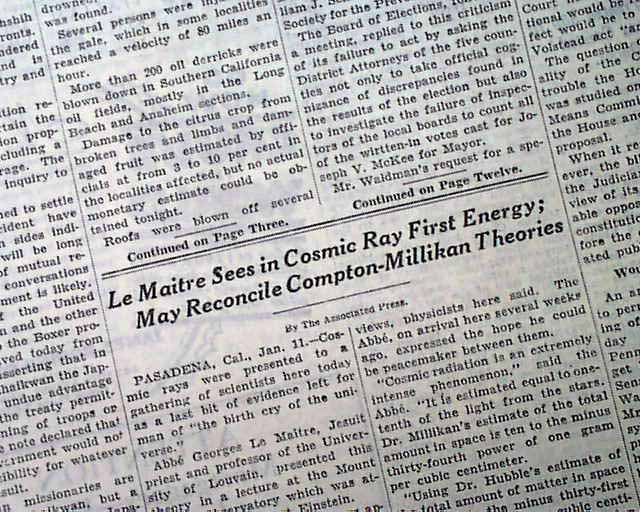 Near the bottom of the front page has a two column heading: "Le Maitre Sees in Cosmic Ray First Energy; May Reconcile Compton-Millikan Theories" (see)
Other news, sports and advertisements of the day. Complete in 38 pages, this is the rare rag edition that was produced on very high quality newsprint, with a high percentage of cotton & linen content, allowing the issues to remain very white & sturdy into the present. Given the subscription cost, libraries & institutions rather than individuals were the primary subscribers of these high-quality editions. Nice condition.


wikipedia notes: In January 1933, Lemaître and Einstein traveled together to attend a series of seminars in California. After the Belgian detailed his theory, Einstein stood up, applauded, and is supposed to have said, "This is the most beautiful and satisfactory explanation of creation to which I have ever listened." However, there is disagreement over the reporting of this quote in the newspapers of the time, and it may be that Einstein was not actually referring to the theory as a whole but to Lemaître's proposal that cosmic rays may in fact be the leftover artifacts of the initial "explosion". Later research on cosmic rays by Robert Millikan undercut this proposal.