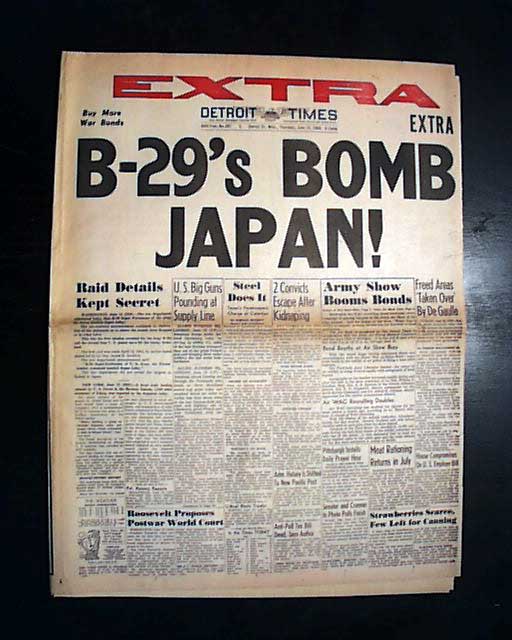 The front page has a nice banner headline in bold lettering: "B-29'S BOMB JAPAN!" with subhead. (see)
Incomplete issue containing 12 of the 28 pages, a little wear along the central fold with a few small archival mends on inside pages, great for display as such.

wikipedia notes: On 15 June 1944, 47 B-29s launched from Chengdu, China, bombed the Imperial Iron and Steel Works at Yawata Japan. This was the first attack on Japanese islands since the Doolittle raid in April 1942. The first B-29 combat losses occurred during this raid, with one B-29 destroyed on the ground by Japanese fighters after an emergency landing in China, one lost to anti-aircraft fire over Yawata, and another, the Stockett's Rocket B-29-1-BW 42-6261, disappeared after takeoff from Chakulia, India, over the Himalayas (12 KIA, 11 crew and one passenger)(Source: 20th Bomb Group Assn.) This raid nearly exhausted fuel stocks at the Chengdu B-29 bases, resulting in a slow-down of operations until the fuel stockpiles could be replenished.