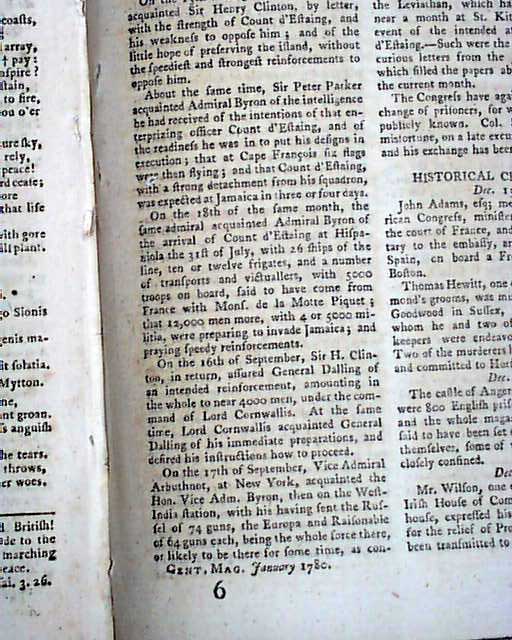 Item # 667946 (was $98) THE GENTLEMAN'S MAGAZINE, London, Jan., 1780  This issue contains in the "Historical Chronicle" near the back the report as shown in the photos, a significant announcement of the death of Captain Cook, reading in part: "...gives the melancholy account of the celebrated Capt. Cooke, late commander of that sloop (Resolution), with four of his private mariners, having been killed on the 14th of February last, at the island of O'why'he, one of a group of new-discovered islands...in an affray with a numerous & tumultuous body of the natives."  The report continues to take a full page with much on his life & explorations.
Also near the back are "American Affairs" with various reports on the Revolutionary War. Also a note that: "John Adams, esq., member of the American Congress, minister plenipotentiary to the court of France, & Mr. Deane, secretary to the embassy, arrived at Corunna in Spain on board a French frigate from Boston." The "Historical Chronicle" also has more on Capt. Cook.
Included is the foldout plate: "Plan of the Fortification Now Erecting at Omoa" along with the: "Plan of the Harbour of Omoa" which accompanies a related article. This plate folds out to measure 8 by 10 inches. Omoa is a town in present-day Honduras.  Also in this issue: "A Parable Against Persecution...Copied from Mr. Franklin's Miscellaneous Works, just published".
Complete in 52 pages, 5 by 8 1/4 inches, full title/contents page with an engraving of St. John's Gate, very nice, clean condition.

A very nice and extremely popular magazine from the "mother country" during the Revolutionary War. This was the first periodical to use the word "magazine" in its title, having begun in 1731 and lasting until 1907.