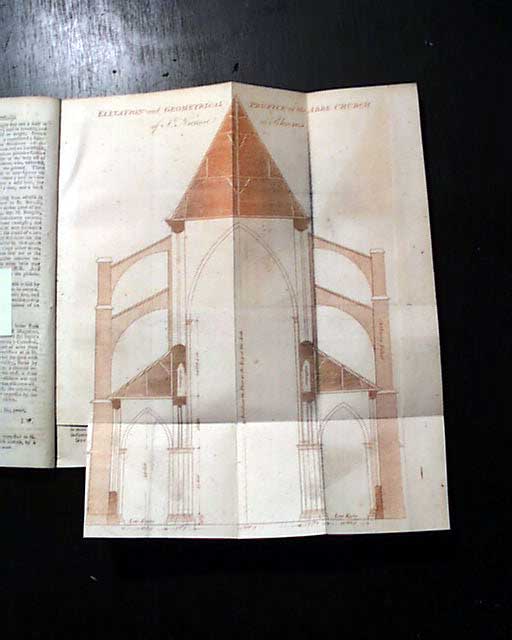 Foldout plate of the Rheims Cathedral...

Item # 667835 THE GENTLEMAN'S MAGAZINE, London, April, 1773  A feature of this issue is the very nice foldout print (in reddish ink) titled: "Elevation and Geometrical Profile of the Abbe Church of St. Nicaise at Rheims", known as the Rheims Cathedral. The plate measures 8 by 10 1/2 inches and has a related article.
Also a full page plate titled: "Curiosities found in the Ruins of Herculaneum" with text also.
Other articles include: "Cases of Drowned Persons Restored to Life" which is nearly 3 pages; "Rise & Progress of the late Expedition to St. Vincents" in the Caribbean, & is very descriptive of it; "Plan for Establishing an Hospital for Lunatics" and much more.
Near the back is the "Historical Chronicle" which has the latest news reports of the day which includes reports from America, beginning: "The mail from New York brought an account of a new cause of contention between the Governor & the House of Representatives of the province of Massachusett's Bay..." with more.
Both plates called for are present & mentioned above.
Complete in 48 pages, 5 by 8 1/2 inches, full title/contents page featuring an engraving of St. John's Gate, very nice condition.