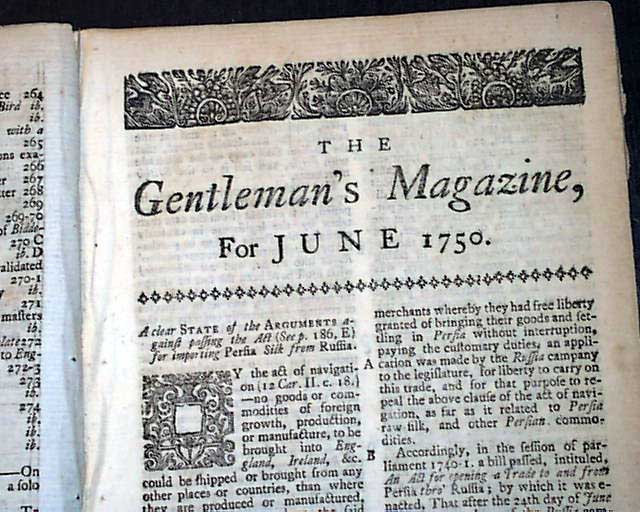 THE GENTLEMAN'S MAGAZINE, London, June, 1750  This issue features a full page plate of two Africans, one of whom, named Job, spent some time in Maryland as a slave, as noted in a brief article which includes: "...he was seized & carried to Joar where he was sold to Capt. Pyke, who...carried him to Maryland and sold him to a planter. Here Job lived about a year without being once beat by his master..." with a bit more, including mention of Mr. Oglethorpe and Georgia as well.
There is also an article which describes the town of Halifax in Nova Scotia. Another page contains at the bottom an illustration of a contrivance on the carrying of water.
Also featured is a foldout plate showing two large birds, with an accompanying article: "Description of the two Birds on the Plate" being the "green crown bird" and the "flammant" with much descriptive text. This plate folds out to 8 by 9 inches.
Other items in this issue include: "Invention against Drowning" "A defence of the Practice of Inoculation for the Smallpox" "Hebrew Meaning of Sister" and somewhat notably: "A Female Soldier" which tells of Hannah Snell's secret military career, about whom there is much written.
Near the back is the "Historical Chronicle" which has: "From Nova Scotia" in Canada, and two items  taken from the Pennsylvania Gazette which was published by Ben Franklin at this time.
Complete in 48 pages, with full title/contents page featuring an engraving of St. John's Gate, 5 by 8 inches, nice condition.