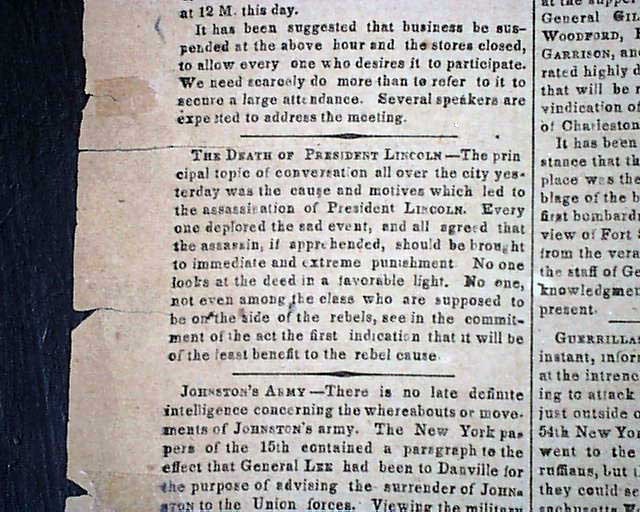 An early issue of this newspaper under Yankee control, as Sherman occupied this significant Confederate city on February 18. This is "new series" volume 1, number 48.
The front page has: "Our Victories" "Important Speech of President Lincoln" "His Views on the Peace Reconstruction & Emancipation Questions" which takes nearly half of the front page. Also: "Important Debate of the Rebel State Legislature of Virginia".
Page 2 has a nice editorial concerning the war including: "...The people all over Jeff Davis' territory are well aware of the hopelessness of the rebel cause...". Also inside: "The Death of President Lincoln" (page 2, col. 1), "Johnston's Army", "Gen. Forrest & the Rebel Cause", "The First Loyal Richmond Paper", and more. The bkpg. has: "Jeff. Davis's Last Proclamation--Virginia to be Held by the Rebels At All Hazards", signed in type: Jefferson Davis. This is followed by: "The Evacuation of the Rebel Capital--The First Rebel Account of How the City was Abandoned".
One of the earliest newspapers from this "hotbed of secession" we have offered after Yankee takeover. Four pages, small folio size, evenly toned, archivally rejoined at the spine with various small archival (and a few non-archival) mends at margins. Should be handled carefully.

The Battle at McDowell, in a Confeder...