Home > Back to Search Results > General Lee is captured...
Click image to enlarge 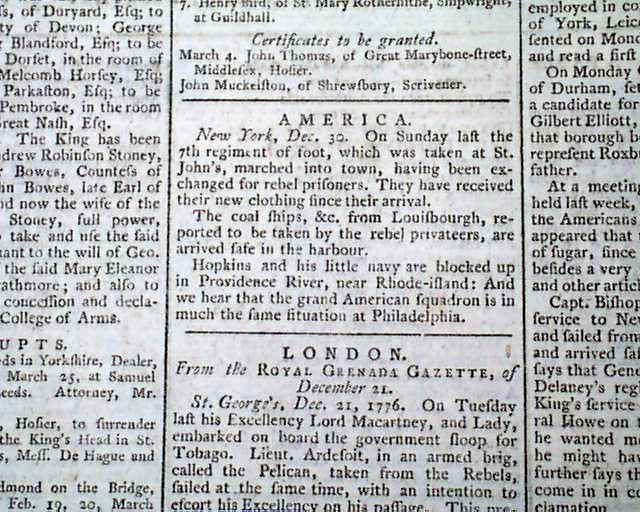 THE LONDON CHRONICLE, England, Feb. 13, 1777  Page 2 has a brief item reading: "The American papers contain an address from the Representatives of the United States of America in Congress assembled to the people in general, & particularly to the inhabitants of Pennsylvania, & the adjacent states signed John Hancock, President & dated December 10, 1776."
Also on pg. 2 is an item headed: "America" reading: "On Sunday last the 7th regiment of foot which was taken at St. John's march into town having been exchanged for rebel prisoners...Hopkins & his little navy are blocked up in Providence River, near Rhode Island; and we hear that the grand American squadron is in much the same situation at Philadelphia." and yet another report includes: "...says that General Howe is in the Jerseys...that Delaney's regiment, which was raised for the King's service in America, was broke by General Howe..." with more.
An inside page has an historic report on the capture of General Lee, including in part: "...on searching him a letter was found, the wafer not dry, directed to General Washington from General Lee. The man was informed if he did not immediately conduct them to the house where the gentleman was who gave him that letter immediate death would be his lot. He complied; the house was surrounded, and General Lee was taken after a stout resistance." with further details.
The back page has a few more particulars concerning the capture of General Lee, including: "...Lee was summoned to surrender, which he complied with, delivered up his sword & in the most earnest manner interceded for his life, desiring to come in under the proclamation..." with more.
Eight pages, 8 1/2 by 11 inches, nice condition.