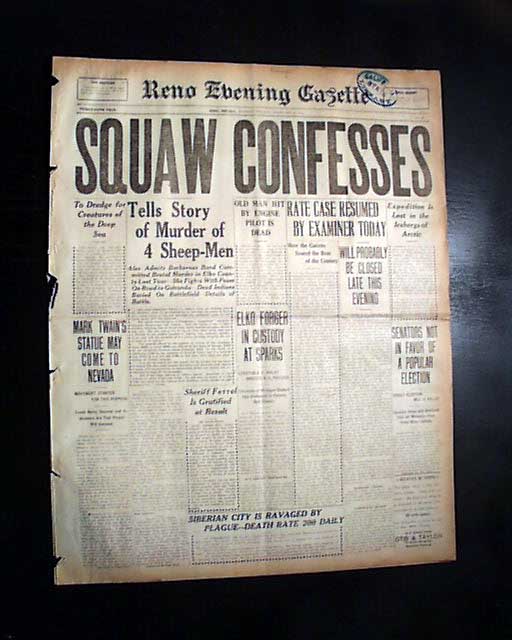 The front page has a terrific banner headline in large, bold lettering: "SQUAW CONFESSES" with subheads. (see) Great for display. Probably only reported as such in a Nevada publication, rare as such.
Eight pages, light toning and some wear at the margins, mainly along the spine, nice for display as such.

wikipedia notes: The Battle of Kelley Creek, also known as the Last Massacre, is often considered to be one of the last known massacres carried out between Native Americans and forces of the United States, and was a closing event to occur near the end of the American Indian warfare era. In January 1911 a small group of Bannocks and Shoshones killed four investigative agents in a ranch after they had been pursued for abducting cattle. A posse of policemen and citizens was sent to track the natives, who were found encamped near Winnemucca, Nevada, in a region known as Kelley Creek. A largely one-sided battle ensued on February 25 that ended with the direct deaths of nine people, eight Daggetts and one mortally wounded American. At the time the affair was briefly characterized as a Native American revolt, though it is now mostly regarded as a family's attempted escape from law enforcement.