Home > Pirate troubles in the Caribbean...
Click image to enlarge 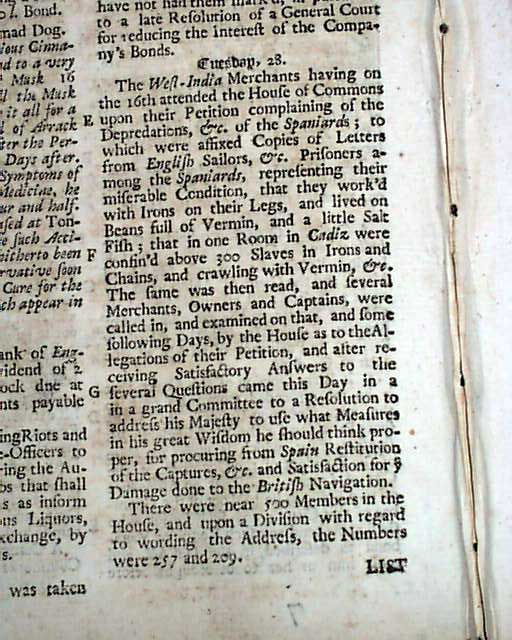 Item # 664690
THE GENTLEMAN'S MAGAZINE, London, March, 1738  There is an interesting article which takes over 2 pages and includes two pages of geometric & mathematical computations headed: "Of the Quantity of the Refraction of Light in the Moon's Atmosphere..." (see for portions).
Among the articles noted in the table of contents are: "Defense of the Quakers Plea against Tythes Concluded" "Advantages of Tythe-free Land" "Milton's Paradise Lost Censur'd" "Christianity set in a New Light" "Jesus a Person Come from Another World" and more.
Near the back is a section headed: "Historical Chronicle" with news from England & other parts of Europe. One of the articles is concerning the depredations of English men held as captives by the Spaniards in the West Indies, including over a full page: "List of British Merchant Ships taken or Plundered by the Spaniards since May, 1728" (see photos for portions), most of which happened in the Caribbean & the coastal colonies.
Another interesting item notes: "New Spain in America, an epidemical distemper has made such terrible desolation that it's feared if it does not speedily cease, this country will become a desert, many towns & villages being already quite destitute of inhabitants."
Complete in 54 pgs. with full title/index page which contains an engraving of St. John's Gate. Measures about 5 by 8 inches, and in very nice condition.
There are no plates or maps called for in this issue.
A very nice pre-Revolutionary War magazine from the "mother country" with a wide range of varied content including news of the day, political reports, literary items, and other unusual tidbits. This was the first periodical to use the word "magazine" in its title, having begun in 1731 and lasting until 1907.