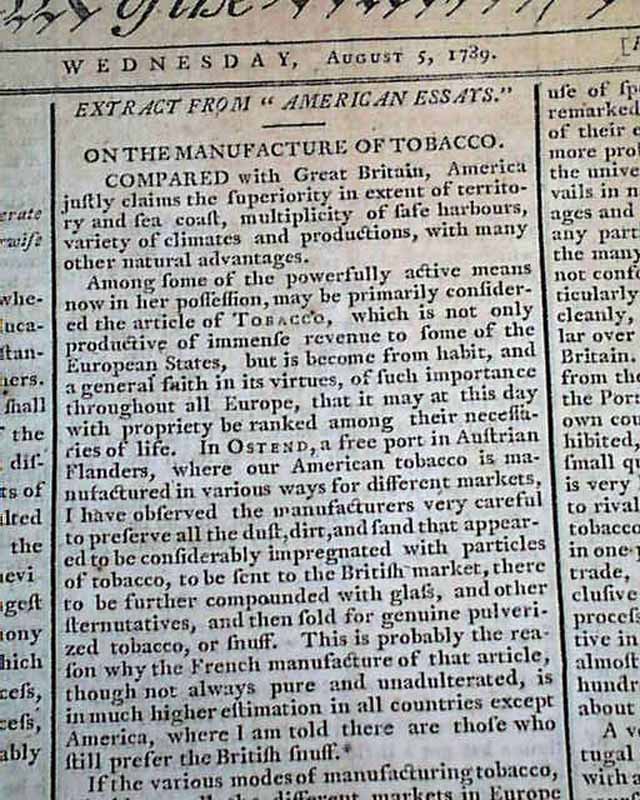 The front page has: "Extracts From American Essays--On The Manufacture Of Tobacco." Page 2 has: "Extracts from the Instructions of some of the Bailiwicks in France relating to the Abolition of the Slave Trade".
A page 3 item says: "Mr. Wilberforce in an energetic pathetic and ingenious speech enforced his plan for the abolition of the slave trade. This speech as complimented and reinforced by Messrs. Burke, Fox, and...William Pitt...." and a bit more.
Page 3 also has:"A Sketch Of Proceedings Of Congress In the House of Representatives of the United States." including discussions on pay for the President & Vice President, a bill for establishing light houses, amendments to the Constitution, & more items of importance during this formative year of the federal government (see for portions).
The back page has the propositions submitted in the House of Commons by Mr. Wilberforce "...which were by consent ordered to lie on the table."
Four pages, never bound nor trimmed with wide margins, some toning at the margins, generally nice condition.