Home > Back to Search Results > Perhaps the definitive Battle of Gettysburg issue...
Click image to enlarge 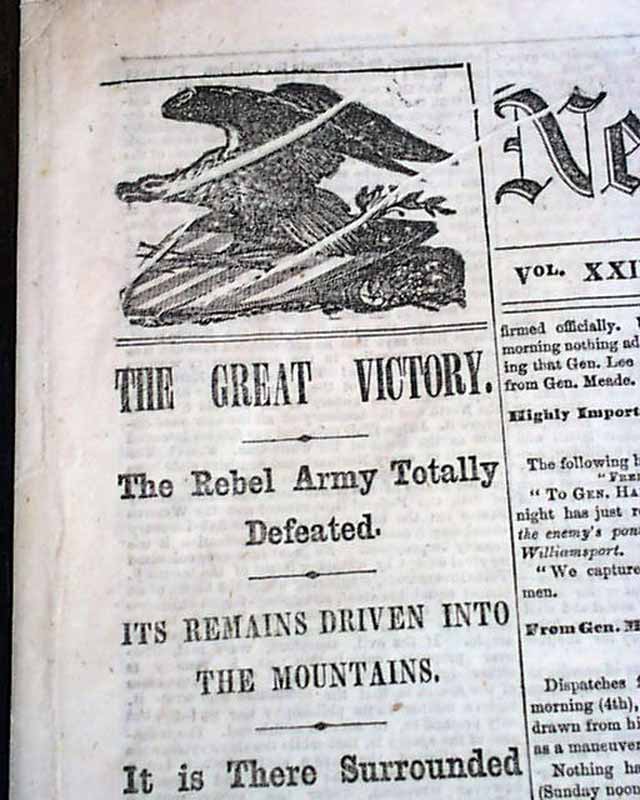 A terrific issue reporting the result of the very historic Battle of Gettysburg, with nearly two-thirds of the front pages first column taken up with related heads, atop of which is a nice patriotic emblem. They include: "THE GREAT VICTORY" "The Rebel Army Totally Defeated" "Its Remains Driven Into the Mountains" "It is There Surrounded and Hemmed In" "Its Retreat Across the Potomac River Cut Off" "20,000 Prisoners Captured" "The Rebel General Longstreet Killed" "Details of the Three Days' Fighting" "The Most Terrific Combat on Record" and even more.
The entire front page and back page are taken up with detailed reports of the Battle of Gettysburg, including a short dispatch signed in type: Abraham Lincoln.
An 8 page issue although 12 are called for. Never bound nor trimmed, and I suspect this was either an 8 page edition or the two additional leaves were advertisements. Several creases, an archival repair at the fold  juncture of the front leaf.