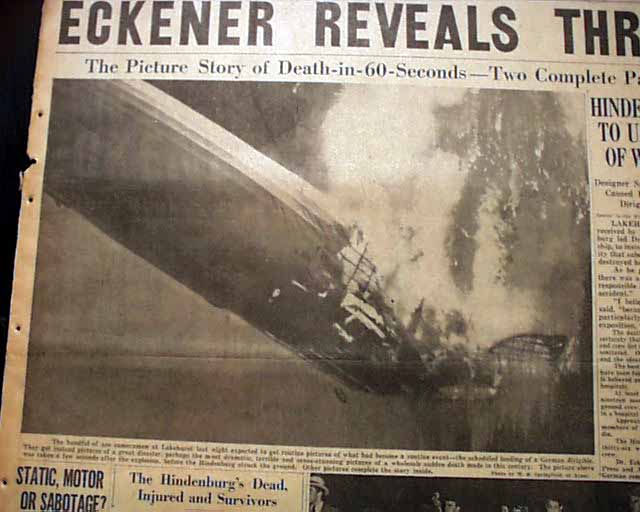 The Hindenburg crashes: many dramatic photos...


NEW YORK WORLD-TELEGRAM, May 7, 1937  The prime feature is the large and dramatic photo of the Hindenburg in flames, shortly after the explosion that would doom 35 of its passengers. Another photo shows stunned spectators: "...watching more than 30 persons burning to death...".
The banner headline hints of a conspiracy: "ECKENER REVEALS THREATS" with a subhead: "Hindenburg Trips To U.S. Met Flood Of Warning Notes" "Designer Says Burning Bullet Could Have Caused Blast & Fire That Wrecked Dirigible--Attache Discounts It." Eckener was the manager of the company which constructed the dirigible.
But the most dramatic feature of this issue would be pages "A" and "B", entirely taken up with five large photos of the Hindenburg in various stages of destruction.  The banner headline stretches across the 2 pages: "The Dirigible Hindenburg Crumples in a Mighty Blast of Flaming Gas---And Makes A Volcanic Landing, Pyre for the Shriveled Dead." More dramatic photos and headlines on pages 2 & 3 (see).
Complete in 48 pages with both sections, a library stamp in the masthead, small binding holes at the blank spine, generally very nice condition.