Home > Death of the King of England...
Click image to enlarge 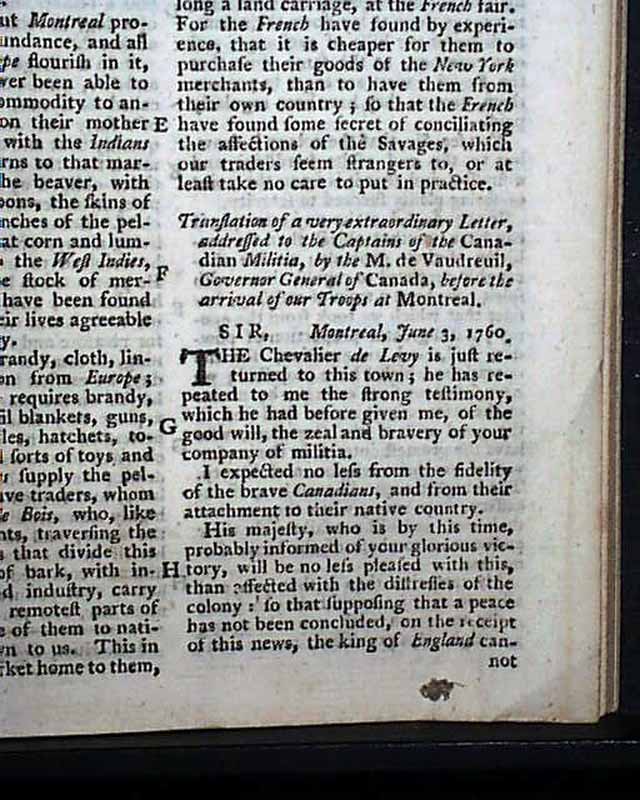 Contains a lengthy article: "An Account of the Taking of Montreal & the subjecting all Canada to the Crown of Great Britain, from the Letters of Maj. Gen. Amherst...". This article takes over 3 pages. It is followed by another nice article: "Description of the Town of Mont Royal, commonly called Montreal..." and this is followed by: "Translation of a very Extraordinary Letter...Before the Arrival of our Troops at Montreal".  The corresponding map, "A Particular Map to Illustrated Gen. Amherst's Expedition to Montreal with a Plan of the Town & Draught of the Island", is not present.
Among other articles in this issue are: "A Remark upon one part of the Memoirs of the late Mr. Handel" "The Phenomenon of the Milky Way Accounted for" "Description of Madagascar" "Lameness Cured by Electricity" "Address of the City of London on Taking Montreal" and more.
Near the back is the "Historical Chronicle" which gives various news reports of the day which includes some reports concerning the French & Indian War. This section also has a report concerning the death of King George II and the accession of King George III.
Complete (excluding plates) in 48 pages, 5 1/4 by 8 1/4 inches, nice condition. Includes the full title/contents page featuring an engraving of St. John's Gate.