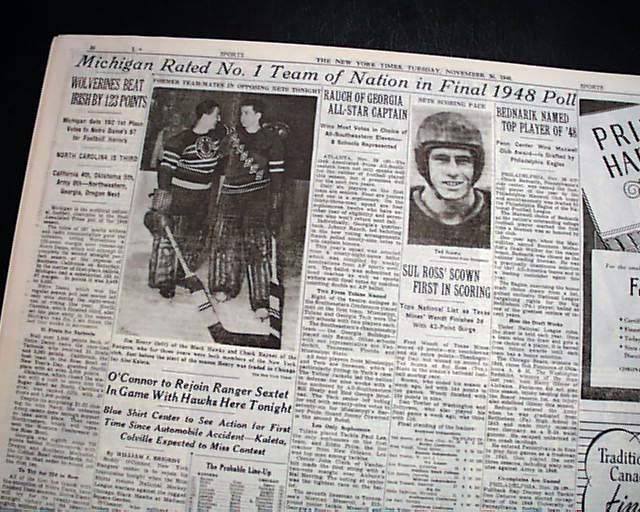 Michigan Wolverines are the 1948 National champions...

The sport's section (page 36) has a six column headline: "Michigan Rated No. 1 Team of Nation in Final 1948 Poll" with subheads that include: "Wolverines Beat Irish By 123 points" and more with standings. First report coverage on the Michigan Wolverines officially being named national champions of college football by the associated press (AP poll). Always nice to have notable events in history reported in this World famous publication.
Other news, sports and advertisements of the day. Complete in 56 pages, this is the rare rag edition that was produced on very high quality newsprint, with a high percentage of cotton & linen content, allowing the issues to remain very white & sturdy into the present. Given the subscription cost, libraries & institutions rather than individuals were the primary subscribers of these high-quality editions. Great condition.

wikipedia notes: The 1948 college football season finished with several unbeaten teams. The Michigan Wolverines and the Fighting Irish of Notre Dame were both unbeaten and untied, as were the California Golden Bears and the Clemson Tigers. Ultimately, Michigan was the first place choice for the majority (192 of the 333) voters in the AP writers poll, but didn’t play in the postseason because of a no-repeat rule for Big Nine schools. Northwestern went to the Rose Bowl instead, and handed California a 20-14 loss.