Home > Back to Search Results > Philadelphia magazine from the formative year of America's government...
Click image to enlarge 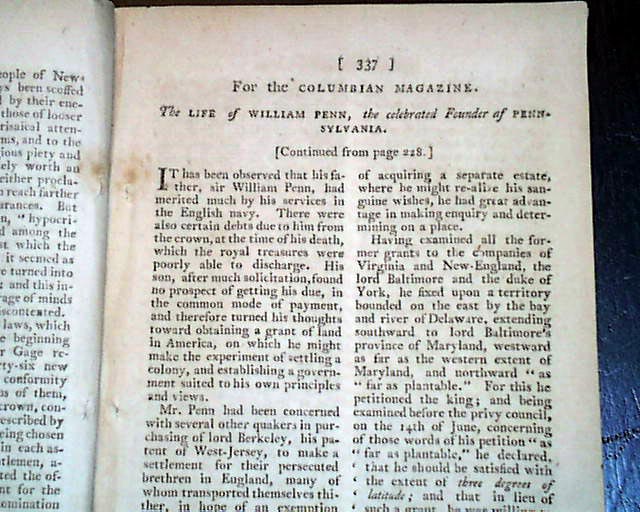 Philadelphia magazine from the formative year of America's government...

* American government in it's infancy era

The issue begins with the continued "Concise History of the Late War In America" which takes 8 pages.
Other articles include: "The Life of William Penn, the Celebrated Founder of Pennsylvania" which is a continued article; "Arguments Drawn from Interest as well as Humanity Against the Practice of Slavery in the French Colonies..." "Description of the Green Woods in Connecticut" (lacking the plate called for), and more.
The back page has "Intelligence" headed: "United States" which includes datelines from New York, Virginia, Georgia, and the Western Territory. Two of the reports deal with relations with Indians (see).
Included is the plate of: "Cook's Patent Drill Plough" (foxed) with lengthy text as well. Lacking the other plate called for.
Complete in 60 pages, full title/contents page, 5 by 8 inches, nice condition.