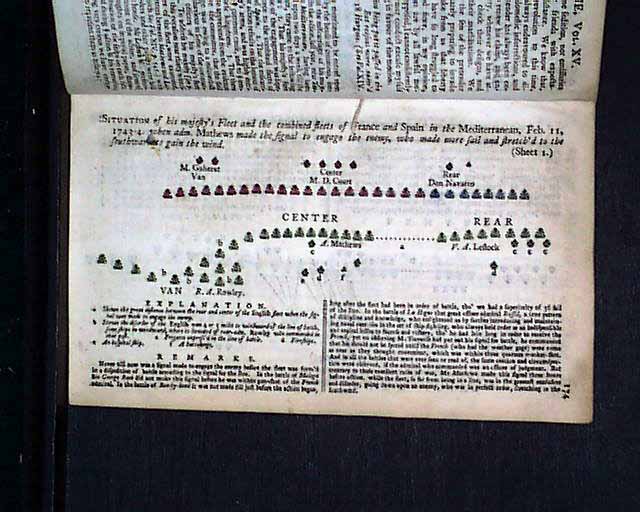 Item # 651009
THE GENTLEMAN'S MAGAZINE, London, England, April, 1745  A feature of this issue is a terrific, three page graphic representation of the: "Situation of his Majesty's Fleet & the Combined fleets of France and Spain in the Mediterranean...when Adm. Mathews made the Signal to engage the enemy..." showing the various positions of the ships (see photos). This is highly unusual. There are "Explanations" and "Remarks" on each page. This is followed by: "V.A. Lestock's account of the late Sea Fight" which takes over 4 pages, and there is also: "Vice Admiral Lestock's Speech" which takes over 9 pages.
Over four pages have: "Experiments on Electricity" concerning the: "...wonderful discoveries made in Germany concerning electricity." Many of the experiments discussed here make Franklin's works seem unoriginal.
Near the back is the "Historical Chronicle" which has various news reports from throughout Europe. Included is a "Letter from Jamaica" which begins: "About 900 negroes had form'd a plot to destroy all the white people..." with more. This is followed by a: "Letter from New England" which makes reference to the very first lottery in America, bits including: "...in order to go upon an expedition, supposed against Cape Breton, with 6000 forces lately raised in the North American colonies...towards the expence of which 27,000 pounds English money is to be raised by way of lottery, a practice never known before in any of the American Plantations."
Over a page at the beginning of the issue is taken up with reports on events in Parliament under the guise of: "Proceedings & Debates in the Senate of Lilliput" as direct reporting on Parliamentary events was prohibited. Among other articles in this issue are: "Irony the Keenest weapon of Satire...", "Of Connivance at Smuggling", "On an Intended motion for a Divorce between Britain & Hanover", a nearly a full page sheet of music: "The Shepherd's Invitation", and another nice graphic taking nearly half a page, under the article: "Mr. Wright's Construction of the late Comet Disproved" (see images).
Complete in 54 pgs. with full title/index page which contains an engraving of St. John's Gate. Measures about 5 by 8 inches, in very nice condition.