Home > Back to Search Results > Martin Van Buren is elected President of the United States...
Click image to enlarge 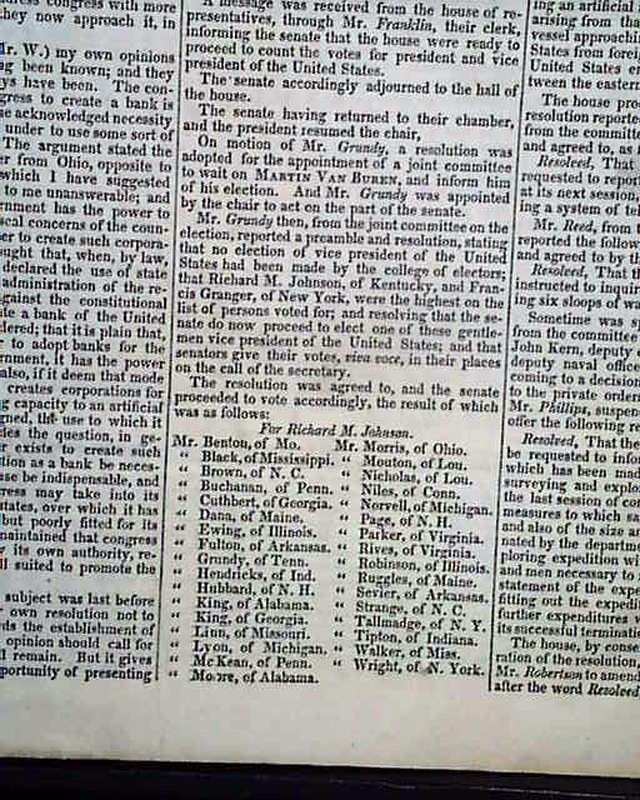 Martin Van Buren is elected President of the United States...


NILES' WEEKLY REGISTER, Baltimore, Feb. 11, 1837  Near the back is a report from Congress which includes, in part, a report of the formal election of Martin Van Buren as President, evidenced by a chart of the electoral vote by state.
The text reads in part: "...the return of electoral votes from each state was opened, read & recorded...After the counting of the votes was completed, & the result declared--The president of the senate proclaimed that Martin Van Buren was elected president of the United States...".
A bit earlier in the issue is a report that "...appointment of a joint committee to wait on Martin Van Buren and inform him of his election...".
Much of the issue reports on the: "Defence of Major General Scott" and also the vote result in the House of Representatives on the: "Admission of Michigan". It became the 26th state on January 26, 1837.
Sixteen pages, 8 1/2 by 12 inches, very lite dampstaining in the upper portion, a couple archival mends in the margins, otherwise in good condition.