Home > Back to Search Results > Beauregard's congratulations on Shiloh...
Click image to enlarge 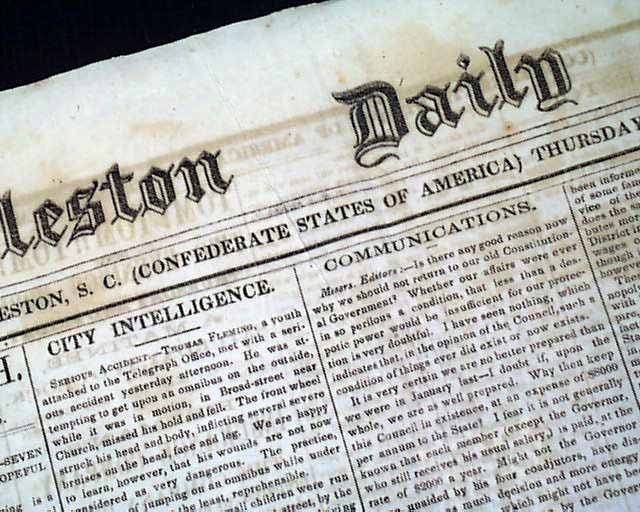 This was one of only a few newspapers which printed: "Confederate States of America" in the dateline (see). The ftpg. includes: "From New Orleans--Glad Tidings from Fort Jackson--Seven Days' Bombardment--The Men Hopeful and In Good Spirits" "The Bombardment of Fort Jackson Continued--Our Troops Cheerful and Repairing Damages--Ultimate Success to Hold the Fort Not Doubted--25,000 Thirteen Inch Shells Fired by the Enemy" "Tracts for Soldiers & Camp Hymns". The best content on the ftpg. is nearly a full column on: "The Surrender of Pulaski".
Page 3 has over half a column headed: "Our Work" which begins: "The enemy is pressing upon our lines with unwonted vigor. His divisions are numerous, thoroughly disciplined, perfectly equipped..." with more (see).
The bkpg. has: "Our Western Correspondence" "News Direct from Nashville" "Interesting Letter--Buell Dead--Senator Doolittle Captured" "Northern News" "From The Peninsula" "The Battle near  Corinth" and other smaller items, but perhaps the best items is: "Gen. Beauregard's Address to the Army" on the victory at Shiloh, beginning: "You have bravely fought the invaders of your soil two days in his own position; fought your superior in numbers, in arms, in all appliances of war. Your success has been signal..." signed in type: G. T. Beauregard.
Complete in 4 pages, never bound nor trimmed (desired), very nice condition.