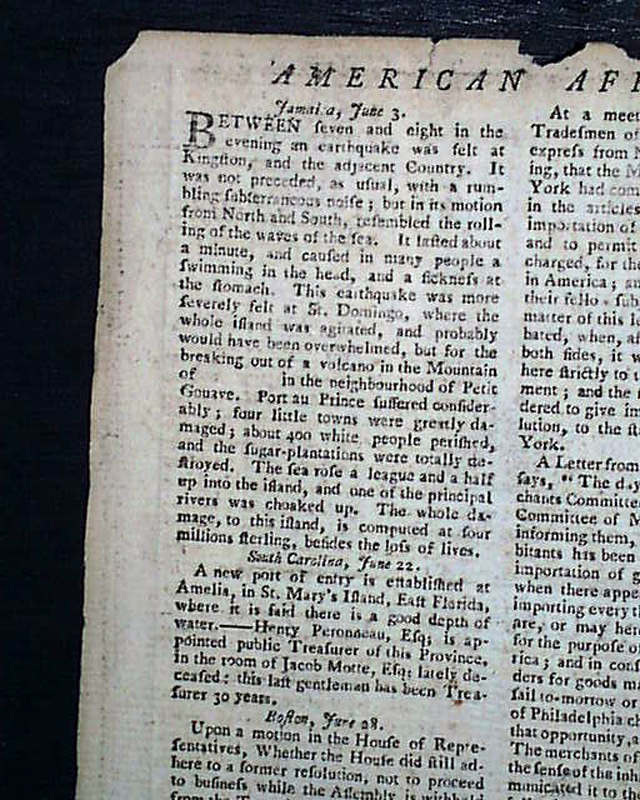 Item # 647079 THE GENTLEMAN'S MAGAZINE, London, August, 1770  The reverse of the title page is filled with: "American Affairs" with reports from Jamaica, South Carolina, Boston, and New York. The report from Boston hints of the growing tensions between England and the colonies with: "...the Assembly at Boston...members refused to proceed to business while under the influence of the military; and therefore insisted on the removal of the soldiery before they would sit. The governor pretended he had no power to alter the disposition of the military & therefore dissolved the Assembly & convened a new one at Cambridge..." with more (see). The report from New York mentions: "...letter received by express from New York was read, importing that the merchants & traders in New York had come to an agreement to relax in the articles of agreement, for the non-importation of goods from Great Britain & to permit such on which no duty was charged for the purpose of raising a revenue in America..." with more, with a similar report from New York concerning the merchants in Philadelphia (see photos).
Also of significance in this issue is a letter concerning the disputes between American & England, noting in part: "It seems to be a prevailing opinion inn Great Britain that the Parliament have a right to tax the Americans, & that, unless they have such a right, America would be independent of Great Britain. And it seems to be a prevailing opinion in America that by taxing them without their consent & where they are not, and cannot be represented, you deprive them of the Rights of Englishmen...you will deprive them of Liberty and property altogether..." with much more taking over half a page (see photos).
Another interesting item in this issue is titled: "The Case of the Rev. Mr. Winder who was Cured by Lightning of a Paralytic Disorder".
Lacking the one plate called for.
Complete in 48 pages, 5 by 8 inches, full title/contents page featuring an engraving of St. John's Gate, very good condition.

A very nice magazine from the "mother country" from the year of the Boston Massacre with a wide range of varied content. This was the first periodical to use the word "magazine" in its title, having begun in 1731 and lasting until 1907.