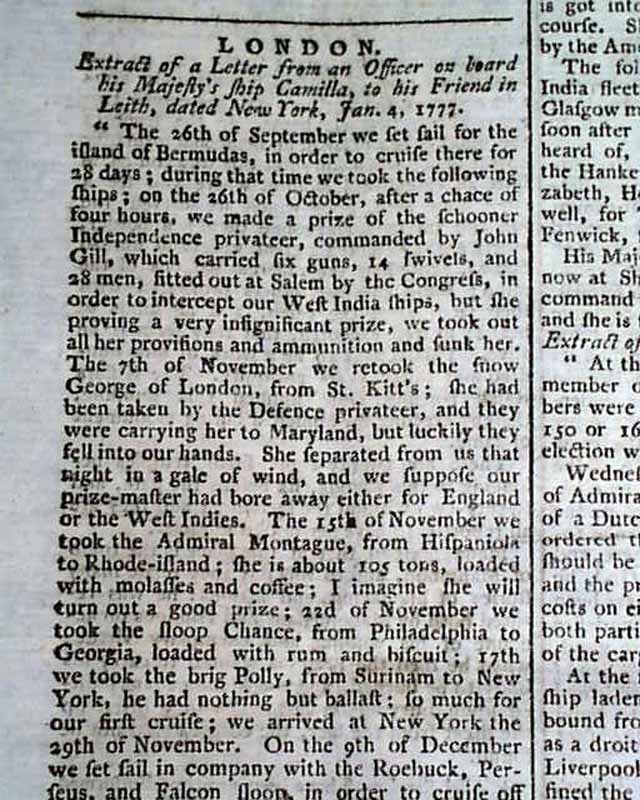 Page 2 has a nice letter on board a British ship to a friend, datelined from New York, Jan. 4, 1777, which is mostly about shipping issues and includes: "...the 14th took a french snow loaded with wine, sugar & field pieces for the Rebels; she sailed from Hispaniola for Philadelphia...a brig from Hispaniola to Philadelphia loaded with gunpowder, molasses & dry goods for the use of the Rebel army..." (see photos).
A Jewish-related item as well reads: "The Annuity Bill has already obtained the appellation of the Jew Bill & with good reason, as it is to restrain the extortion of Jew Brokers whether of the circumcised or uncircumcised. The necessitous grantors of annuites on their own lives who were ashamed to employ their own attorney in such a ruinous business fled to the advertising quacks who held out the baits of dispatch & secrecy, & here, as in other secret cases, the quacks made the credulous pay exorbitant extortion for a secret which they had communicated to hundreds." (see)
Other items of American interest include: "...has since April last taken, retaken, sunk, burnt & destroyed 37 said of ships belonging to or in the possession of the Provincials." Another page has an interesting letter concerning the involvement of the British in the Revolutionary War beginning: "...furnished the most unanswerable arguments against prosecuting the present war in America; for if, as they seem to have irrefragably proved, we ought not to plant colonies in extensive continents of the same climate with the Mother Country...we should ot endeavour to retain them at least not to such an immense expence of blood & treasure as we are now lavishing upon our North American settlements...should be be able to conquer the towns on the sea coast of America we shall be obliged to maintain them by a military force..." with much more (see photos) taking almost a full column.
The back page has some additional items concerning the Revolutionary War (see photos) including: "Gen. Howe desire Lt. Col. Mawhood will accept his thanks for his gallantry & good conduct in the attack he made upon the enemy the 3rd instant...".
Eight pages, 8 1/4 by 11 1/2 inches, very nice condition.