Home > Back to Search Results > Great Confederate coverage of the first Battle of Bull Run...
Click image to enlarge 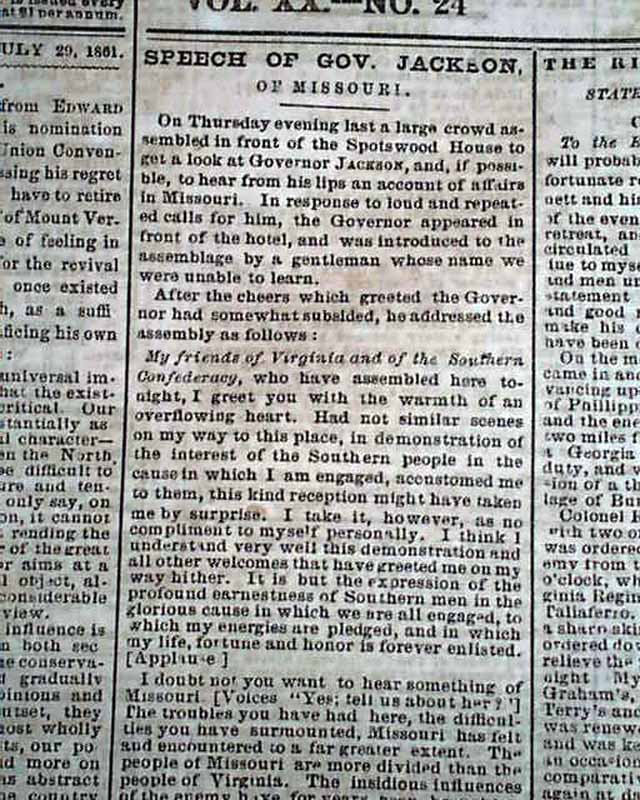 Great Confederate coverage of the first Battle of Bull Run...

A nice newspaper from the capital of the Confederacy. Almost the entire front page is taken up with war-related reports with items headed: "Speech of Gov. Jackson of Missouri" "The Rich Mountain Fight--Statement of Col. Fulkerson" "From Gloucester Point" "From Yorktown" "From Norfolk" "Affairs about Williamsburg" "From Logan County" "From the Kanawha Valley" and more.
The war coverage carries over to pages 2 & 3 as well with: "The Great Victory" which comments on the Battle of Manassas (see); "Newspapers & Fault-Finders" "Mr. Crittenden, Kentucky & the South" "Necessity of Vigilance" "The Retreat From Laurel Hill" "Wants a Rebel Cent"; a letter from Manassas Junction" and more.
But certainly the best content in this issue is the two column article headed: "THE BATTLE OF MANASSAS" "Highly Interesting Narratives--Gallant Conduct of Officers & Men--Scenes & Incidents--The Eighth Georgia Regiment..." with excellent coverage. This is followed but another full column article headed: "The Pursuit at Manassas" which has a fine account, and then another: "The Eighth Georgia Regiment in the Battle at Stone Bridge" & "Facts & Incidents of the Battle" & "the Black Republican Press on the Battle of Manassas" with more.
Complete in 4 pages with a banner masthead, light dirtiness to the front page, very nice condition.