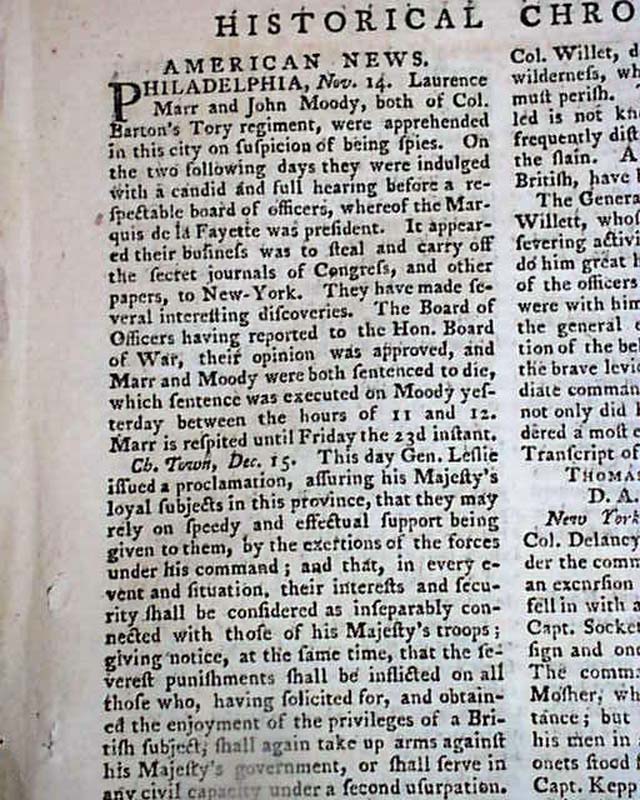 Near the back is over a page of "American News" with reports on closing events of the war, including an item from Philadelphia: "Laurence Marr & John Moody, both of Col. Barton's Tory regiment, were apprehended in this city on suspicion of being spies...were both sentenced to die...". Also: "...the American generals Greene & Hayter have issued an edict for a general pardon to all those persons who took the oath of allegiance during Lord Cornwallis's march to Virginia....".
An item from Fishkill notes: "....the enemy have been completely disappointed in their designs on the northern frontiers of this state..." with more. And a report from South Carolina notes: "...that Major Craig, with the troops were arrived at Charles-Town; that all the outposts were called in to reinforce the garrison..." with more.
Further on are additional Revolutionary War reports with news on: "...an account of the action between him [Col. Stewart] and Gen. Greene on the 8th of September...his satisfaction in having totally defeated Gen. Greene & taken from him 2 pieces of cannon...", with more. This was the Battle of Eutaw Springs.
The issue begins with 7 pages of reports from the House of Commons, and includes a number of additional articles which provide a glimpse of the period. Also included the foldout plate called for.
Complete in 48 pages, 5 by 8 inches, full title/contents page with an engraving of St. John's Gate, very nice, clean condition.