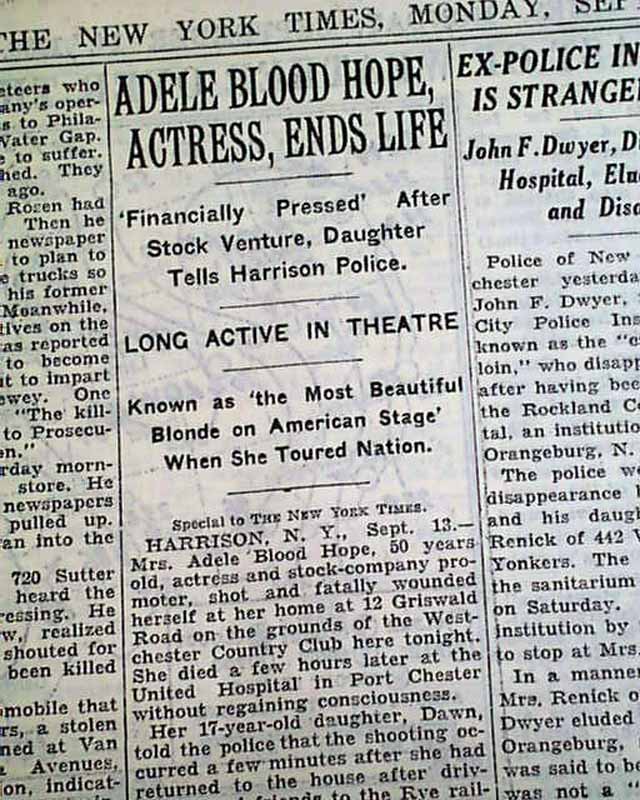 The top of the back page has a one column heading: "ADELE BLOOD HOPE, ACTRESS, ENDS LIFE" with subheads. (see) First report coverage on the suicide death of this American actress in silent movies, vaudeville and theater.
Other news, sports and advertisements of the day. Complete in 42 pages, this is the rare rag edition that was produced on very high quality newsprint, with a high percentage of cotton & linen content, allowing the issues to remain very white & sturdy into the present. Given the subscription cost, libraries & institutions rather than individuals were the primary subscribers of these high-quality editions. Nice condition.

wikipedia notes: On the night of September 13, 1936, Blood shot herself in the head at her home on the grounds of the Westchester Country Club in Harrison, New York. She died a few hours later at the United Hospital in Port Chester, New York. Her 17-year-old daughter, Dawn, was in the home with friends when they heard the sound of a gunshot come from Blood's bedroom. Dawn told police that her mother had been financially pressed and worried excessively in the previous two weeks. Adele's possessions were auctioned off garnering $1,000.