Home > Rare mention of Virginia in this early title...
Click image to enlarge 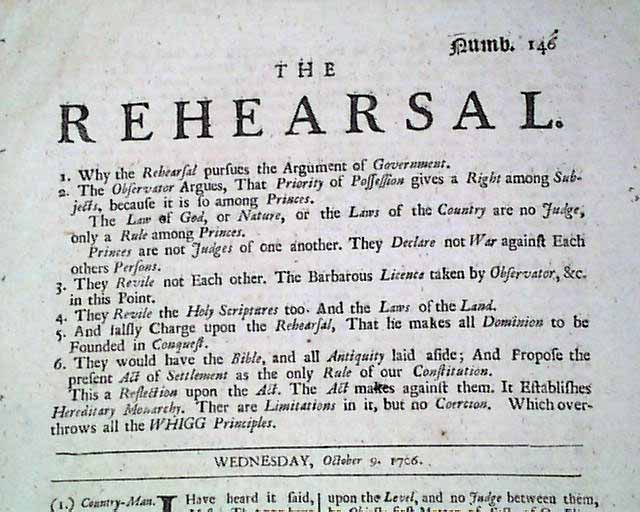 Rare mention of Virginia in this early title...

A fine single sheet newspaper which lasted only 6 years. It was published by Charles Leslie, considered a violent controversialist who was virtually inextinguishable. Another source notes: "...in August 1704, he had started, in opposition to the ‘Observator’ and Defoe's ‘Review,’ a periodical entitled ‘The Rehearsal.’ It was published...beginning with 10 April 1706. In form ‘The Rehearsal’ was a lively dialogue between Rehearsal and Observator or Countryman, and, though largely occupied with matters of merely ephemeral interest, afforded Leslie scope for a familiar exposition of his views on serious matters...." (see Wikipedia for more).
The front page includes: "...Tat Priority of possession gives a right among subjects, because it is so among princes". This discussion notes Queen Elizabeth is said to have taken possession of Virginia over claims of several princes who had priority of title to those New World lands, etc. Rare mention of an American colony in this early newspaper.
Single sheet, 13 3/4 by 8 inches, great condition.