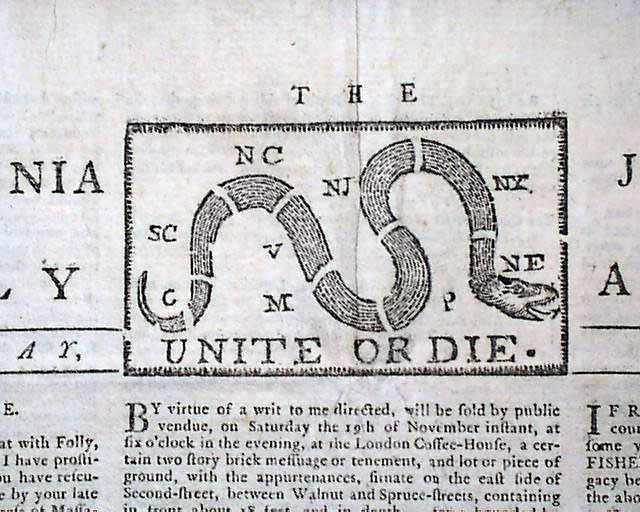 THE PENNSYLVANIA JOURNAL; AND THE WEEKLY ADVERTISER, Philadelphia, November 16, 1774

If there was one graphic which represented the spirit of the Revolutionary War it would have to be the ubiquitous segmented snake with the famous "Unite Or Die" caption.  The engraving, a prominent device in the masthead of this newspaper, shows a snake cut into various pieces, each with a label of a colony with the implied message that only by each of the separate colonies uniting under a single cause could the country--the snake--hope to strike back & be successful in defeating the British.
Ben Franklin is credited with creating this device, considered the very first political cartoon when he used it in his Pennsylvania Gazette in 1754 to rally the colonies to unite during the advent of the French & Indian War. It would become a symbol of colonial freedom during the Revolutionary War. This engraving is found in most history books, but very rarely is such an edition of the Pennsylvania Journal found & offered to the collector market.
Over half of the first column is a very critical, yet supportive, letter: "To General Gage" which has much interesting content, a few bits including: "The whole of your proceedings are so repleat with folly...your late answer to the address of the Provincial Congress of Massachusetts Bay taught me that you are a more proper object for ridicule...you have apologised for constructing what has been unjustly called a fortress on the Boston Neck. The same factious spirit which leads the Bostonians to call submission to government Slavery--Kings, Tyrants--Ministers, Rascals--& Governors a compound of the whole...You have commenced no hostile steps against the province of Massachusetts Bay, you have only raised a creature like yourself, which 'unless annoyed will annoy nobody.' " with much more, & near the end: "...The liberties of America will be safe while you are held up as an epitome of the military spirit & generosity of the British nation. Resentment begins to subside in our bosoms--for the whole of your operations scarcely entitle you to contempt."
Content from America continues on pages 2 & 3 including a report noting in part: "...accounts from the westward...that on the 12th ult. an engagement happened at the mouth of Kanhawah between about 600 Virginians commanded by Col. Andrew Lewis & about 600 Indians of different nations...lasted, including the Indians firing on their retreat, until an hour before sunset. The Virginians took 18 scalps with the loss of 40 killed...The Indians only got one scalp..." with more (see). Page 2 also has a great letter which has near the beginning: "The province having been repeatedly alarmed at your Excellency's unusual & warlike preparations since your arrival...that you would desist from & demolish your fortifications on Boston neck..." with more comments which are in response to the letter on the front page (see above). The lengthy letter continues with much criticism of the work of General Gage & the presence of British troops in Boston, including: "It must be a matter of grief to every true Briton that the honour of British troops is sullied by the infamous errand on which they are sent to America, & whilst in the unjust cause in which you are engaged menaces, will never produce submission from the people of this province..." and much more. A terrific letter expressing anger towards the British that would lead to war. Much more content on page 3 including some details of the battle between the Virginians and the Indians at Kanhawa (see).
Four pages, a few discrete archival mends to the inside spine not touching any text, a bit of foxing to the ftpg. spine & fold, generally in very nice condition. An exceedingly rare opportunity for a most desirable, displayable, and rare newspaper. 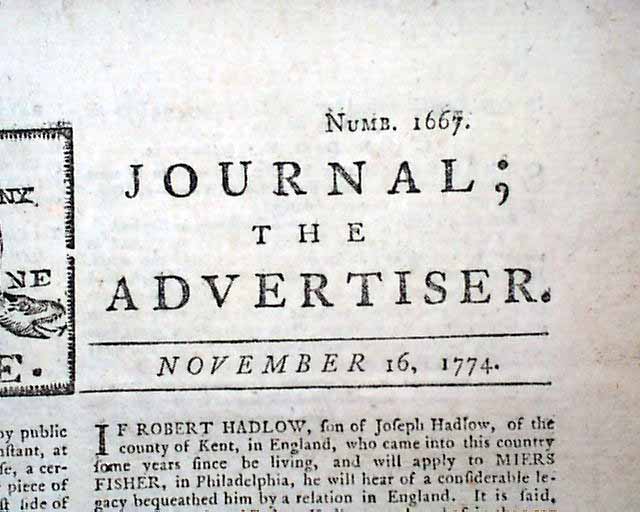 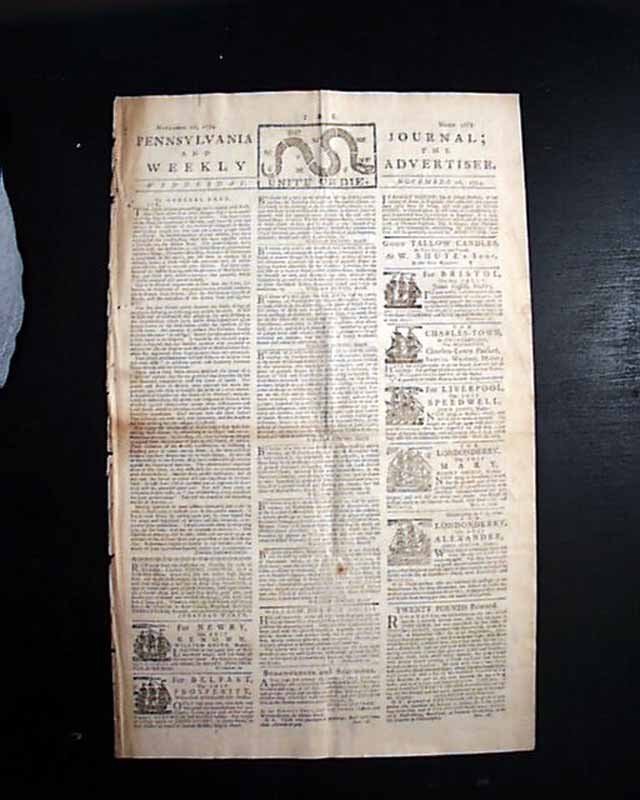 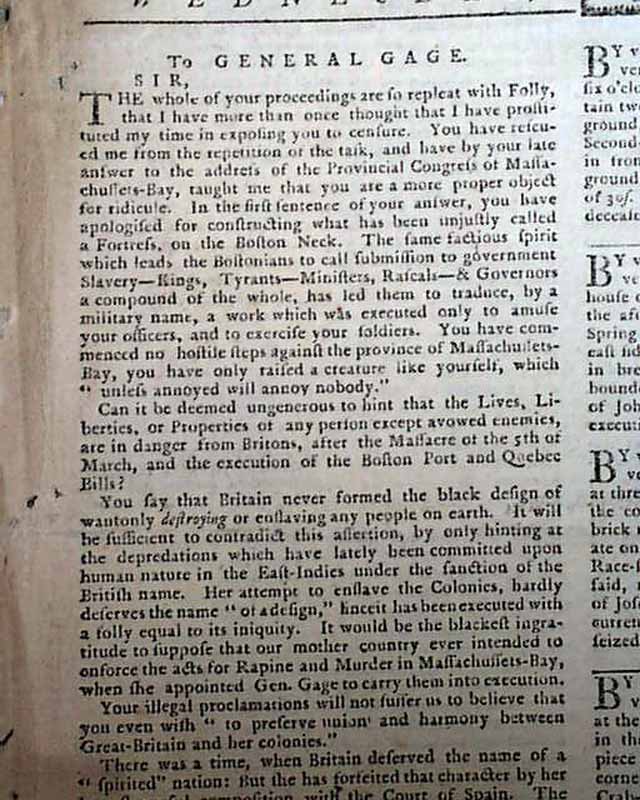 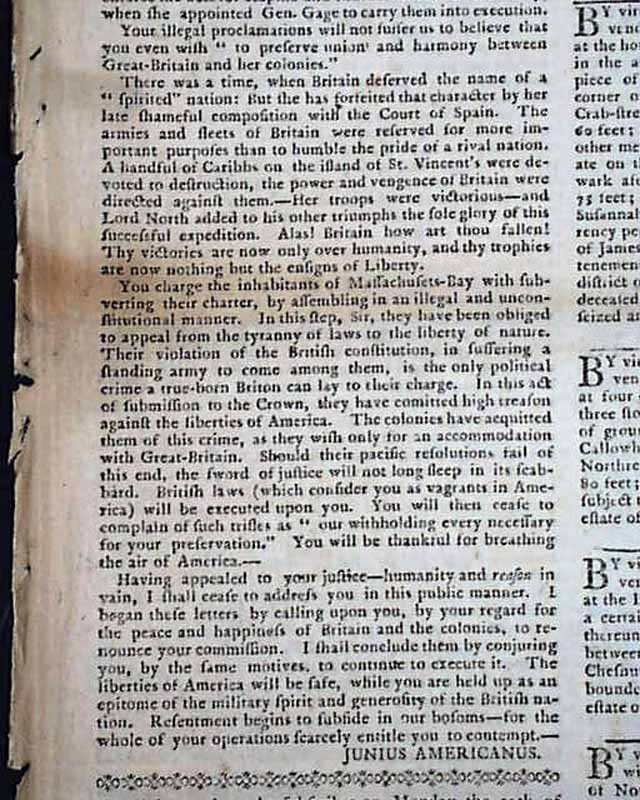 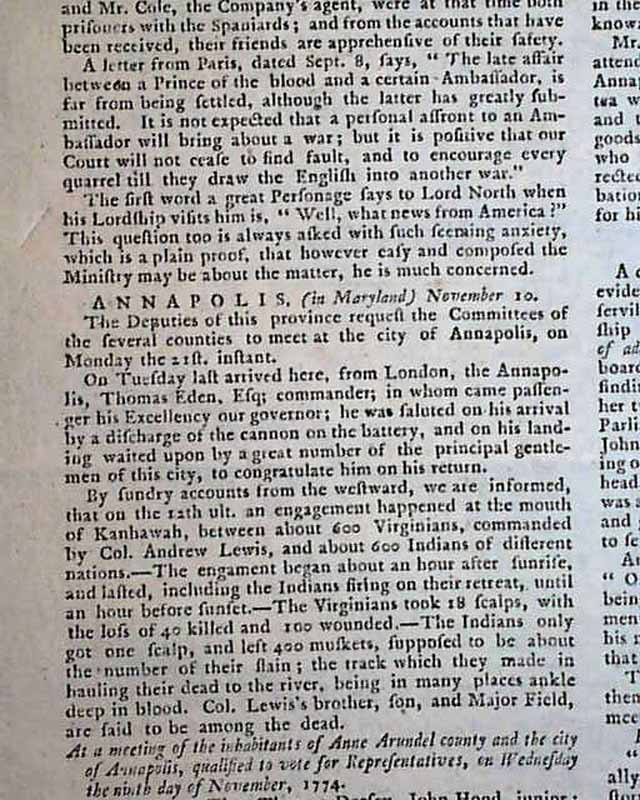 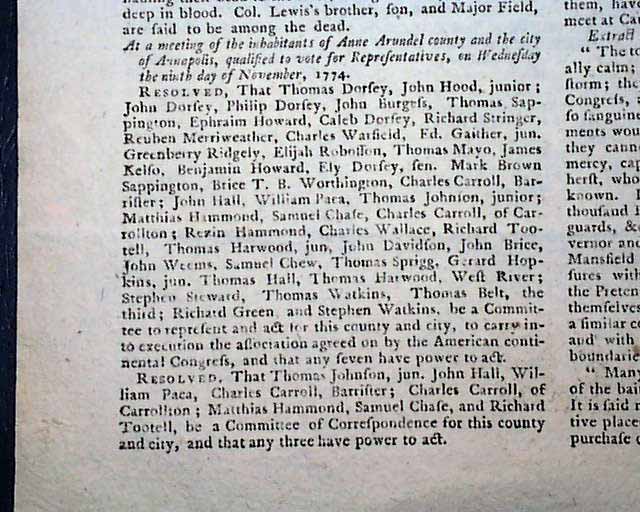 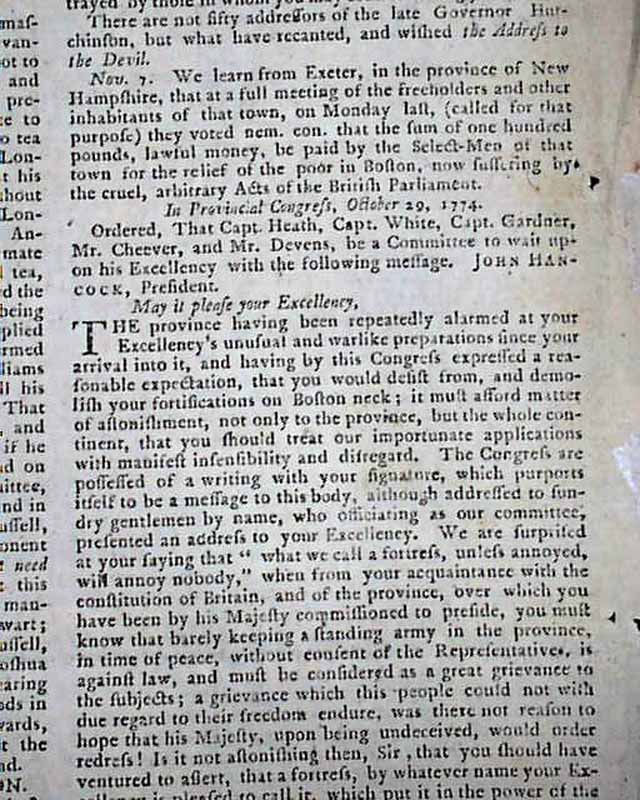 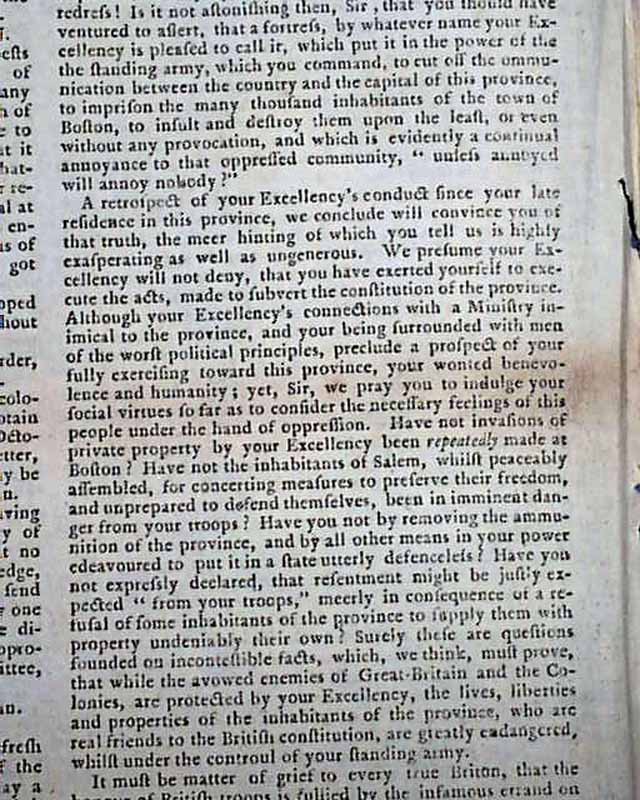 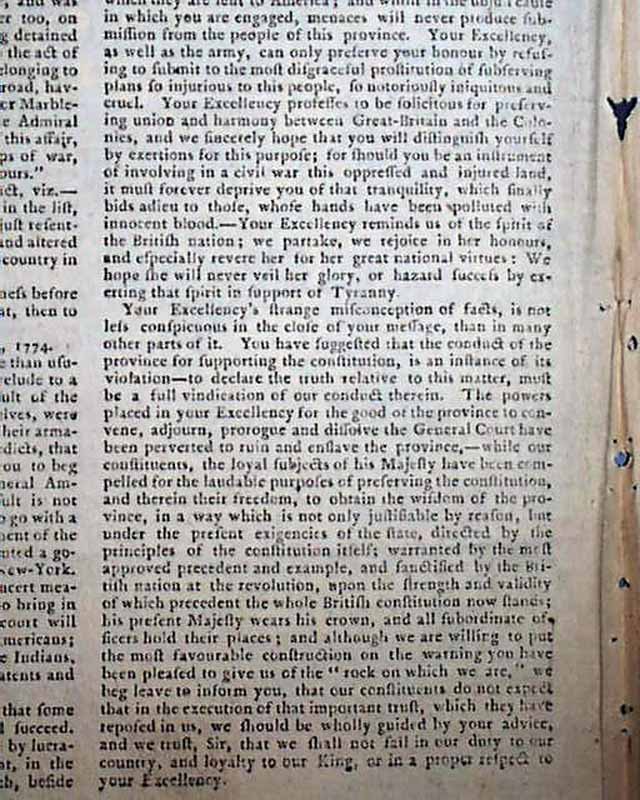 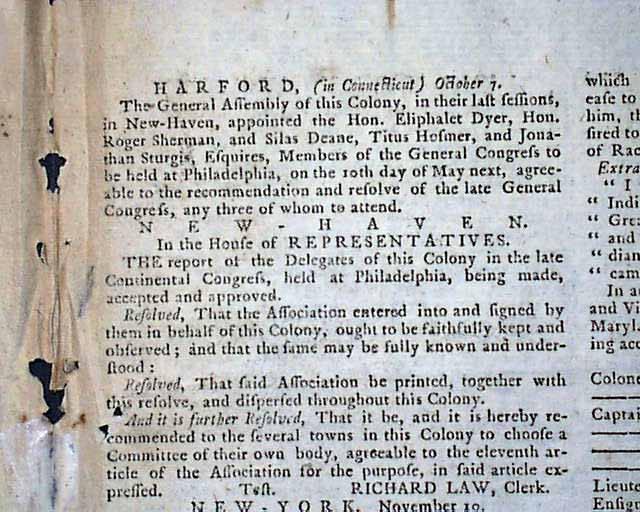 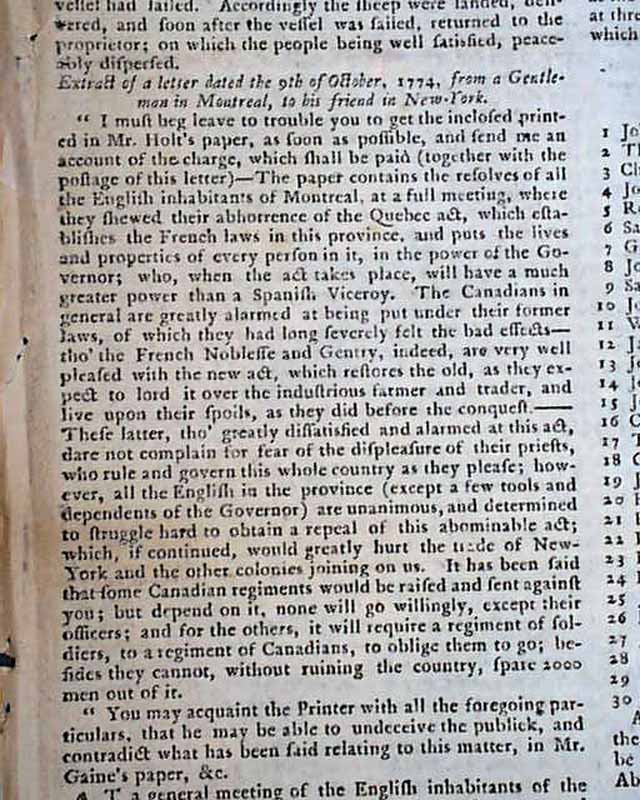 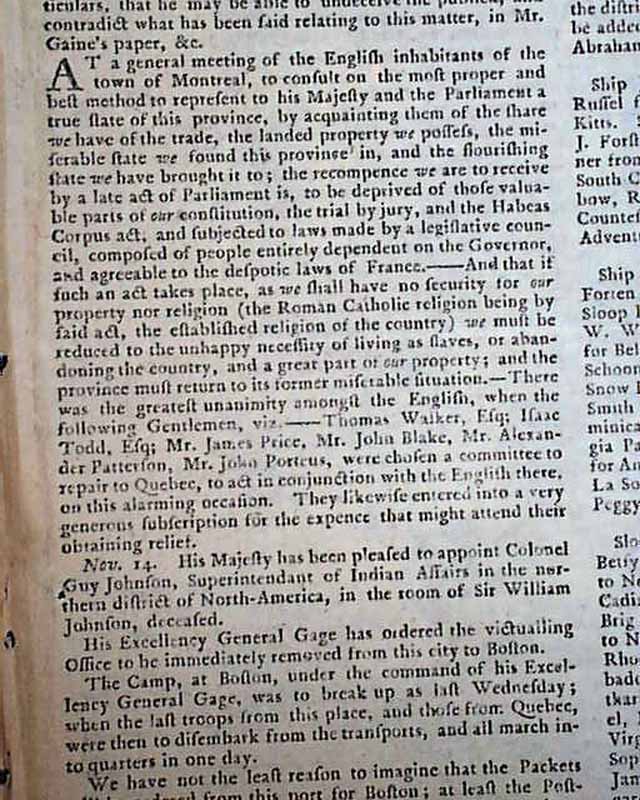 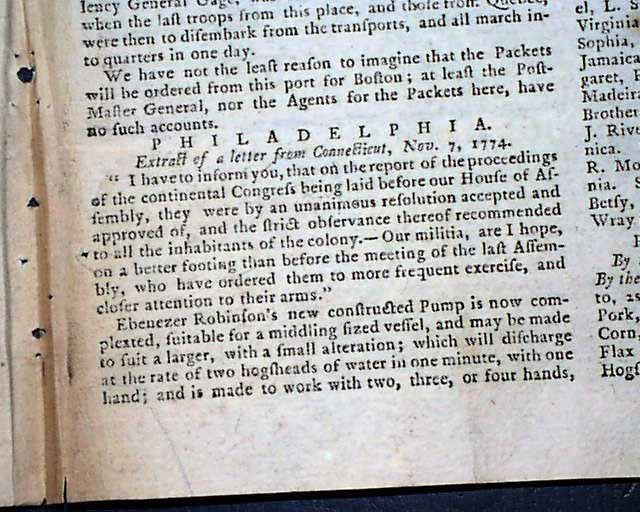 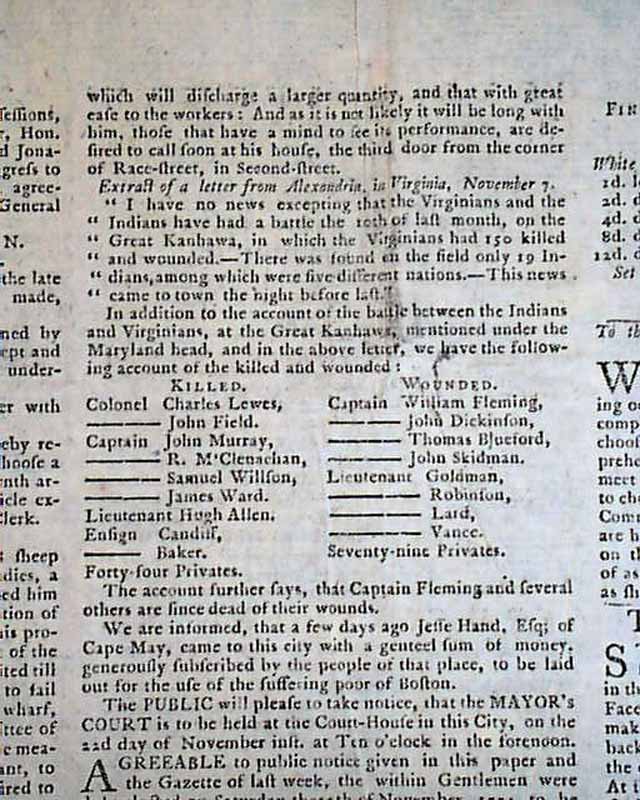 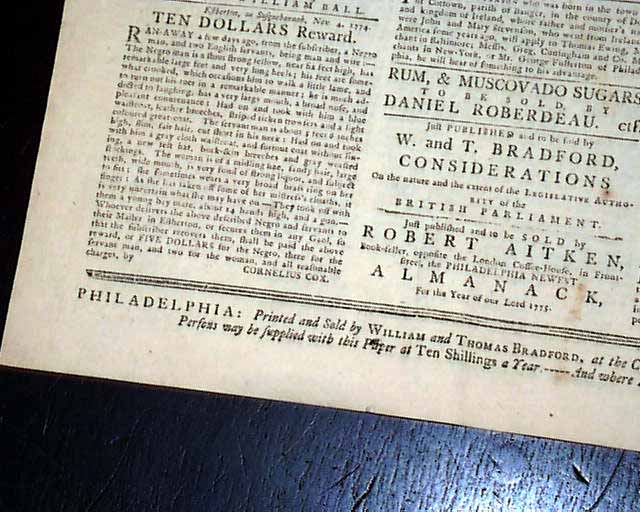