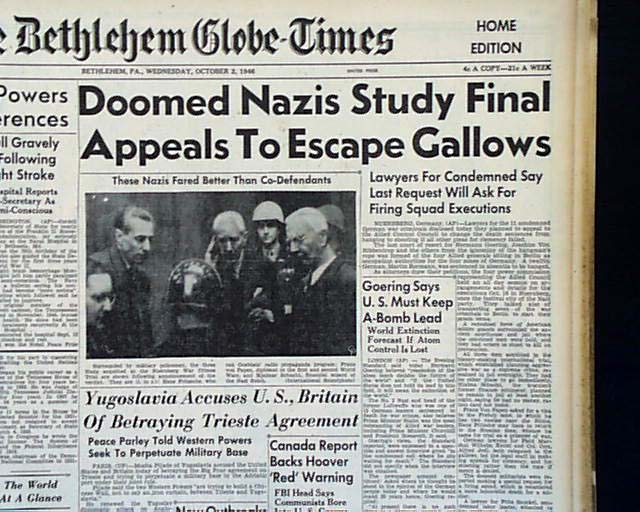 The front page has the two-line, 5-column heading: "Doomed Nazis Study Final Appeals To Escape Gallows", with subheads: "Lawyers For Condemned Say Last Request Will Ask For Firing Squad Executions" and "Goering Says U.S. Must Keep A-Bomb Lead - World Extinction Forecast If Atom Bomb Control Is Lost". A photo with the caption: "These Nazis Fared Better Than Co-Defendants" is also present. The reports tell of some of the follow-up responses to the guilty verdict handed down for some of the most powerful Nazi leaders. Other news of the day throughout. The issue is complete in 34 pages, has minimal margin wear, and is in otherwise good condition.

wikipedia notes: The Nuremberg trials were a series of trials, or tribunals, most notable for the prosecution of prominent members of the political, military, and economic leadership of Nazi Germany after its defeat in World War II. The trials were held in the city of Nuremberg, Germany, from 1945 to 1946, at the Palace of Justice. The first and best known of these trials was the Trial of the Major War Criminals before the International Military Tribunal (IMT), which tried 22 of the most important captured leaders of Nazi Germany. It was held from November 21, 1945 to October 1, 1946. The second set of trials of lesser war criminals was conducted under Control Council Law No. 10 at the US Nuremberg Military Tribunals (NMT); among them included the Doctors' Trial and the Judges' Trial. This article primarily deals with the IMT; see the Subsequent Nuremberg Trials for details on those trials.