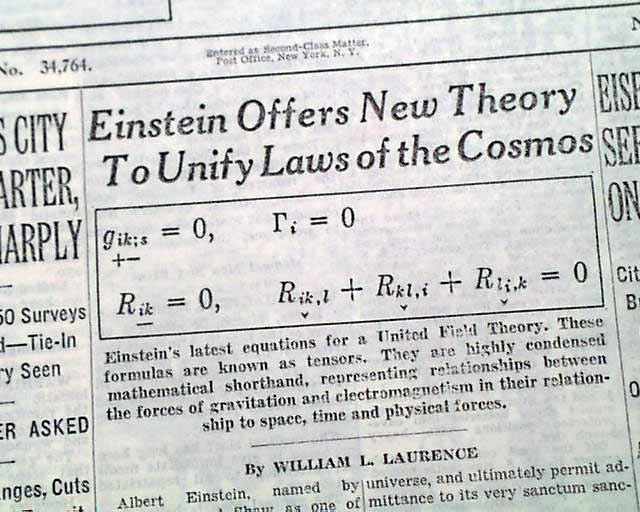 This 40 page newspaper has a two column headline on the front page, "Einstein Offers New Theory To Unify Laws of the Cosmos", with related equation and supporting text. Other news of the day throughout. Rag edition, a little rough at the margins, overall nice condition (see images).

wikipedia notes: In physics, a unified field theory is a type of field theory that allows all of the fundamental forces between elementary particles to be written in terms of a single field. There is no accepted unified field theory yet, and this remains an open line of research. The term was coined by Albert Einstein who attempted to unify the general theory of relativity with electromagnetism. A Theory of Everything is closely related to unified field theory, but differs by not requiring the basis of nature to be fields, and also attempts to explain all physical constants of nature.

There may be no a priori reason why the correct description of nature has to be a unified field theory; however, this goal has led to a great deal of progress in modern theoretical physics and continues to motivate research. Unified field theory is only one possible approach to unification of physics.