Home > Back to Search Results > Newsbook from the mid-17th century...
Click image to enlarge 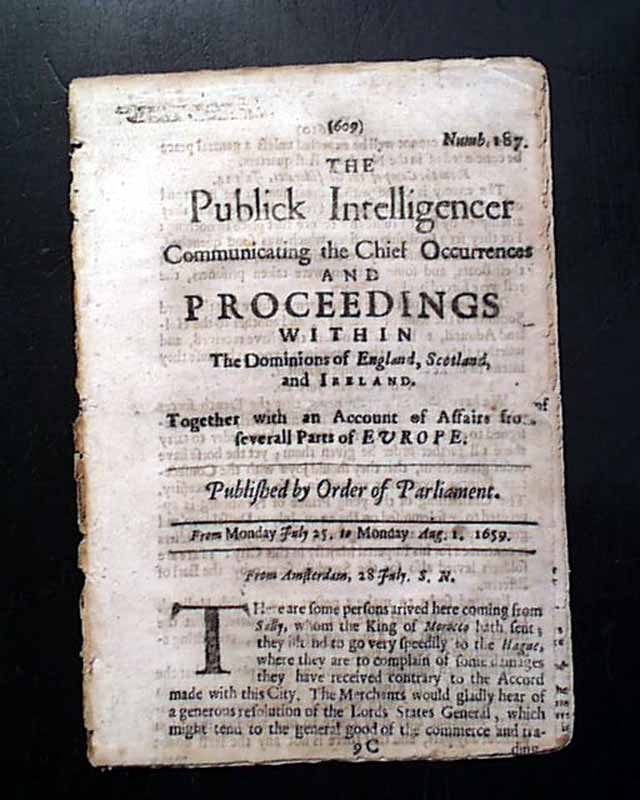 Newsbook from the mid-17th century...


"THE PUBLICK INTELLIGENCER, Communicating the Chief Occurrences & Proceedings Within the Dominions of England, Scotland, and Ireland: Together with an Account of Affaires from Severall Parts of Europe.", London, August 1, 1659

Certainly one of the less common newsbooks from the 17th century. Newsbooks were the predecessors of today's newspapers, done in small size with one column yet published on a regular interval & each issue numbered and dated.
As the title suggests this issue is filled with news reports from all corners of Europe, most concerning military affairs. This is from the closing period of the English Civil War with various items on the troubles including: "...And for any other of their wicked plots against the Commonwealth, let all the honest and welaffected people (through) the Nation know they are under the Curse; so that whatever they do against the Commonwealth is but making pits for their own destruction.". Further on is much from Parliament including: "...The Bill for the union of England and Scotland was this day read the second time. Resolved, That the House be resolved into a Grand Committee on Tuesday morning next, upon the Bill of Union of England with Scotland.".
Another report headed: "Whitehall" begins: "This day more information...concerning the new designs of the Cavaliers, upon the account of Charles Stuart, to involve the Nation in blood, the beginning of August being the time appointed for their rising in most parts of the Nation..." with more.
Complete in 16 pages, measures 5 1/2 by 7 3/4 inches, a bit irregular at some margins but no loss of text. Good condition.