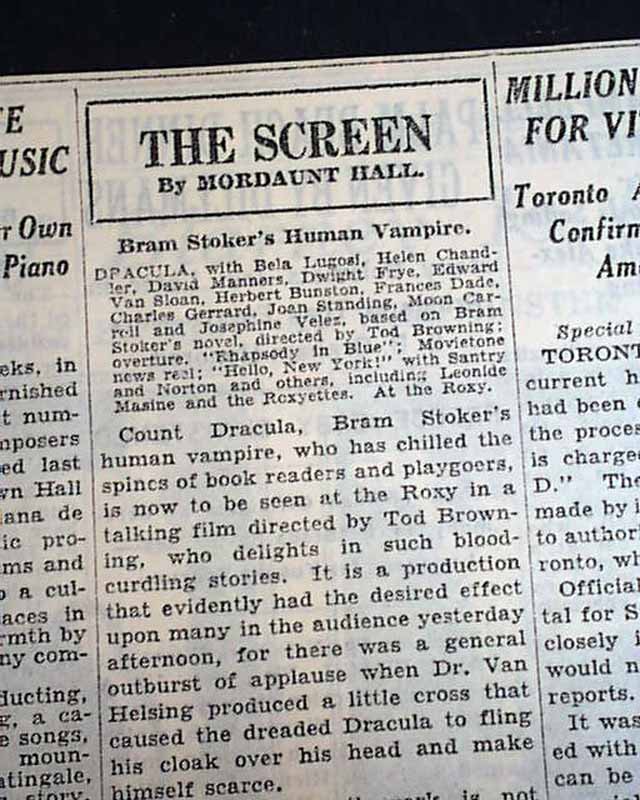 This 44 page newspaper has a very significant & historic review for the movie "Dracula" in it's entertainment section (page 25). Under "The Screen" is a small one column heading: "Bram Stoker's Human Vampire" which is a review of this famous movie on it's opening day the previous afternoon. Also on the same page is a very small advertisement for the movie on it's 2nd day. A rare opportunity to have a original piece of history from this classic movie before the public first viewed it.

Vampires have become a big fad in this country of late, and here is when it all started.

wikipedia notes: When the film finally premiered at the Roxy Theatre in New York on Feb. 12, 1931, newspapers reported that members of the audiences fainted in shock at the horror on screen. This publicity, shrewdly orchestrated by the film studio, helped ensure people came to see the film, if for no other reason than curiosity. Dracula was a big gamble for a major Hollywood studio to undertake. In spite of the literary credentials of the source material, it was uncertain if an American audience was prepared for a serious full length supernatural chiller. Though America had been exposed to other chillers before, such as The Cat and the Canary (1927), this was a horror story with no comic relief or trick ending that downplayed the supernatural.

Nervous executives breathed a collective sigh of relief when Dracula proved to be a huge box office sensation. Within 48 hours of its opening at New York's Roxy Theatre, it had sold 50,000 tickets.