Home > Back to Search Results > Rare issue of the Oxford Gazette...
Click image to enlarge 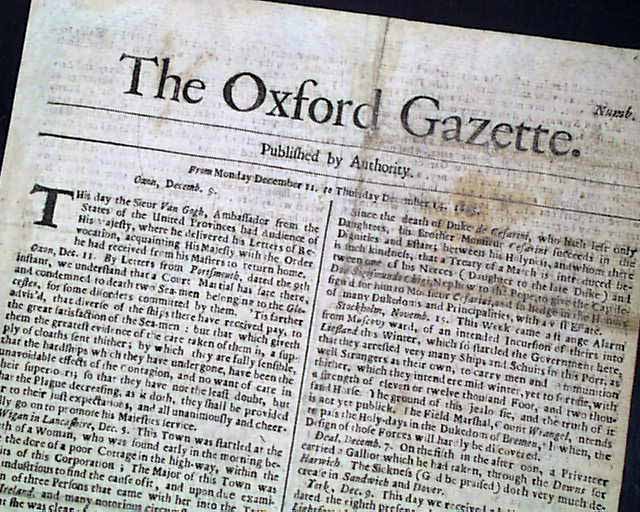 Rare issue of the Oxford Gazette...


THE OXFORD GAZETTE, England, Dec. 14, 1665  This is an extremely famous--and rare--title, being the predecessor of the famous "London Gazette", the oldest continually published English language newspaper in the world. Plus this is the #9 issue.
Because of the Plague at this time, the Royal Court had removed itself from London to Oxford when this newspaper began, so issues #1 thru #23 were published simultaneously in Oxford & London and when the contagion had subsided & the Court returned to London this newspaper went with it and renamed itself "The London Gazette" with issue #24, and the rest is history.
The content is entirely taken up with reports from various parts of Europe, most with a military theme. The front page has a bit relating to the Great Plague which was ravaging Europe at the time, including: "...a supply of cloaths sent thither, by which they are fully sensible that the hardships which they have undergone have been the unavoidable effects of the Contagion, and no want of care in their superiors so that they have not the least doubt by that the Plague decreasing, as it doth, they shall be provided for to their just expectations..." and then a report of the death of a woman, whom the feared had the Plague, but then determined: "...she destroy'd herself by poyson."
The bottom of the back page has an account of the weekly loss from the Plague: "The London Bill of this week runs thus. Total 442. Plague 243. Increase 14." (see)
Complete as a single sheet issue, 7 by 11 1/4 inches, some light dirtiness to the upper right of the ftpg., generally nice condition.
Certainly a very scarce newspaper and a cornerstone issue for any early newspaper collection, being an early issue of the world's oldest continually published newspaper.