Home > Beginning of World War I...
Click image to enlarge 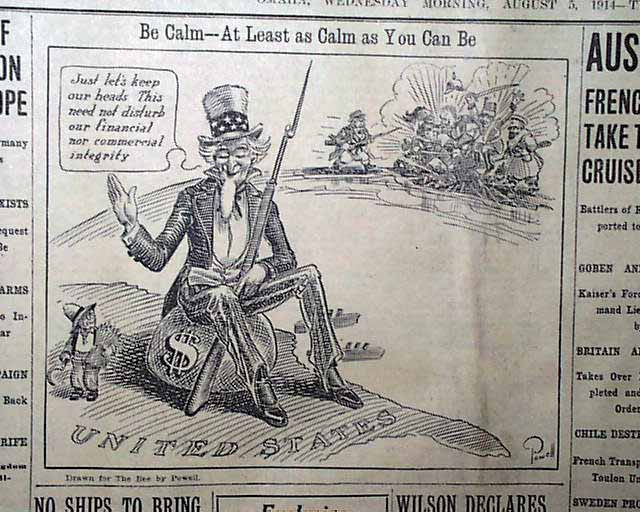 Beginning of World War I...


THE OMAHA DAILY BEE EXTRA, Omaha, Nebraska, August 5, 1914  The front page of this issue has a banner headline at the top of the page "Great Britain and Germany to War" with subhead banner "French Capture German Cruisers -- English Vessel Sunk". Other front page headlines are "Austria and Germany Meet Defeats" with subheads "French Warships Take Two German Cruisers Sink One" "German Leaders Pledge Loyalty on Kaiser's Hand"; "Battle Roar of The British Lion Shakes Europe"; "Wilson Declares U. S. Neutrality"; "Austrians Are Badly Defeated"; and more. There is also a large political cartoon with Uncle Sam.
Other news, sports and advertisements of the day are within.
This is complete in 12 pages with a slightly irregular left spine with even toning. Should be handled with some care.