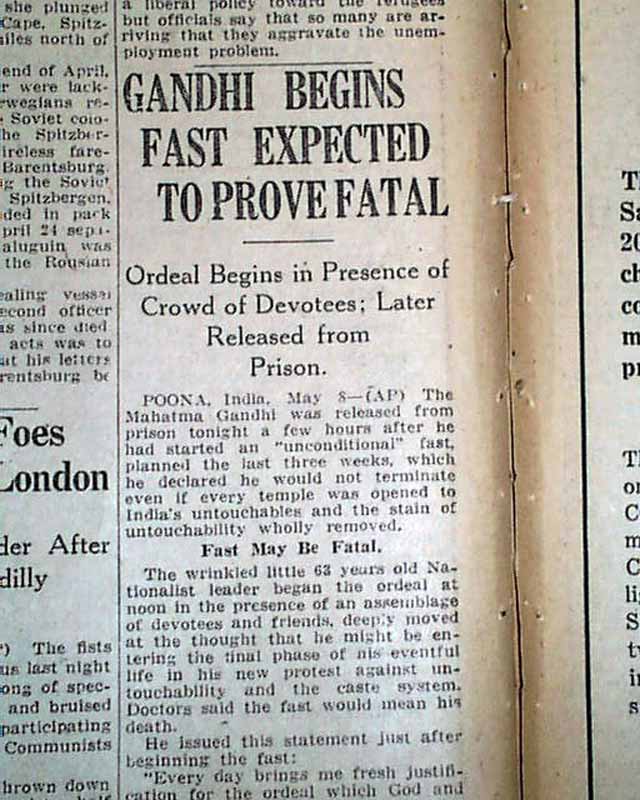 
THE SPRINGFIELD UNION, Massachusetts, May 9, 1933

Page 4 has one column headings: "GANDHI BEGINS FAST EXPECTED TO PROVE FATAL" "Ordeal Begins in Presence of Crowd of Devotees; Later Released from Prison" See images for text here.
Other news, sports and advertisements of the day throughout. Complete in 20 pages, a little margin chipping, otherwise good.

wikipedia notes: On 8 May 1933 Gandhi began a 21-day fast of self-purification to help the Harijan movement. This new campaign was not universally embraced within the Dalit community, however, as prominent leader B. R. Ambedkar condemned Gandhi's use of the term Harijans as saying that Dalits were socially immature, and that privileged caste Indians played a paternalistic role. Ambedkar and his allies also felt Gandhi was undermining Dalit political rights. Gandhi, although born into the Vaishya caste, insisted that he was able to speak on behalf of Dalits, despite the availability of Dalit activists such as Ambedkar.