Home > George Washington and his hope in God... Peaceful transition of authority: John Adams is inaugurated as the 2nd President...
Click image to enlarge 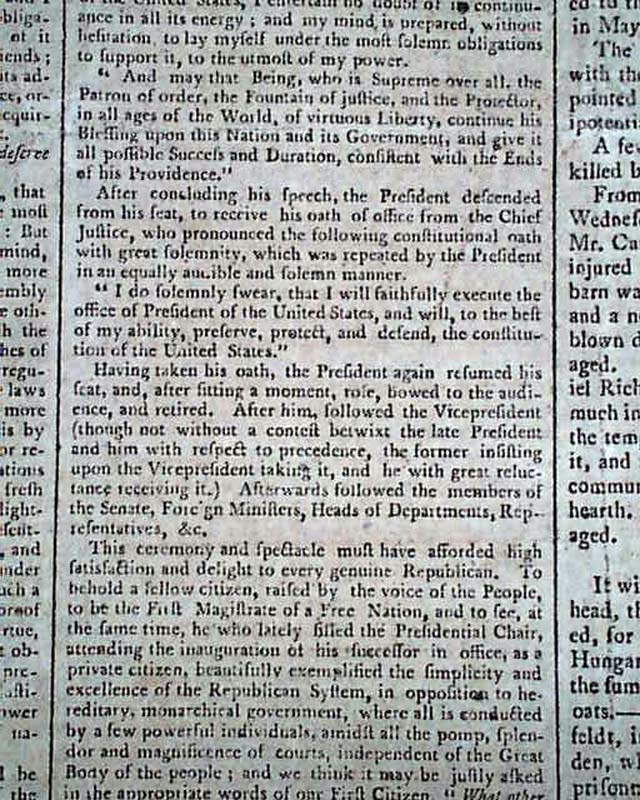 Peaceful transition of authority: John Adams is inaugurated as the 2nd President...


THOMAS'S MASSACHUSETTS SPY OR WORCESTER GAZETTE, March 15, 1797  A very historic issue has page 2 has: "Inauguration of the President" beginning: "On Saturday at twelve o'clock...JOHN ADAMS, as President of the United States attended in the chamber of the House...to take the oath of office...On his entrance, as well as on the entrance of the late President, and of THOMAS JEFFERSON, the Vice President, loud and reiterated applause involuntarily burst from the audience..." with more on the process (see), and also noting: "...the President proceeded to deliver the following SPEECH" and what followed is his inaugural address.
After its conclusion: "...the President descended from his seat to receive his oath of office from the Chief Justice who pronounced the following constitutional oath with great solemnity..." and what follows is the full text of the oath of office (rarely found in period newspaper reports).
Further on is a report of the inauguration of the Vice President: "The oath required by law was the same day administered, in the presence of the Senate of the United States, to THOMAS JEFFERSON, Vicepresident of the United States and President of the Senate, when he took the chair & addressed them as follows:..." and what followed is his inaugural address (see).
Although the peaceful transfer from one administration to another is taken for granted now, at the creation of the federal government it was an unknown concern as to what would happen. Would Washington become dictatorial? Would he refuse to leave office? Would the nation need to be reconstructed with each new President? Would a "shakeup" in authority cause disruption in commerce that would ripple down to effect every citizen of the new nation? A portion of the text printed here beautifully details the peaceful & respectful transfer of authority: "...Having taken his oath the President again resumed his seat...rose, bowed to the audience, and retired. After him, followed the Vice-president (though not without a contest betwix the late President and him with respect to precedence, the former insisting upon the Vice-president taking it, and he with great reluctance receiving it.)...To behold a fellow citizen, raised by the voice of the People to be the First Magistrate of a Free Nation, and to see at the same time he who lately filled the Presidential Chair attending the inauguration of his successor in office, as a private citizen, beautifully exemplified the simplicity and excellent of the Republican system, in opposition to hereditary monarchical government..." with more. A tremendous endorsement of the American democratic system.

Of related interest is a page 2 address from the Representatives of Congress from Massachusetts to George Washington beginning: "As you have announced to the people of the United States your intention to retire from the cares and decline the honors of public life...", with his response which includes in part, "Should it please God, according to the prayers of your constituents, to grant me health and long life, my greatest joy will be to behold the prosperity of my country... [and] that I have been the happy instrument of much good to my country and to mankind, will be a source of unceasing gratitude to heaven.", signed: Go. Washington.