Home > The edition prior to the assassination...
Click image to enlarge 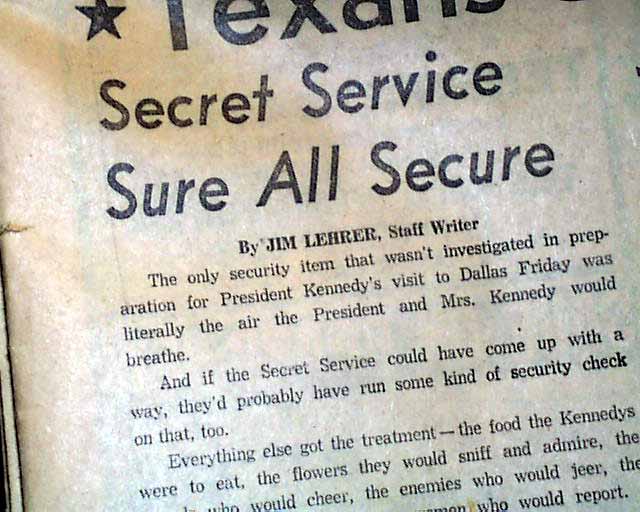 The edition prior to the assassination...


THE DALLAS TIMES HERALD, Texas, November 22, 1963  Serious collectors always try to obtain historic newspapers from the city where the event happened. For JFK's assassination that would be a Dallas newspaper. But this is an edition I do not recall having offered previously.
This is the November 22 edition prior to the shooting, noted as the "Final Edition" but it obviously was not: two more editions reporting the assassination were issued later in the day. Since this edition hit the streets before the shooting the front page reports the travels of Kennedy in Texas, mostly events in Fort Worth which was his stop before Dallas (see for the various headlines). Inside pages have much on his visits to San Antonio and Houston. One ironic front page headline notes: "Secret Service Sure All Secure" with a detailed article on the security being taken for his visit to Dallas (see). Also of curious interest--and only to be found in a Dallas newspaper--are two inconspicuous advertisements to be found on facing inside pages. One is for the 'Texas" movie theater, where Lee Harvey Oswald was arrested (trivia: he was watching the movie "War Is Hell": see photo) and the facing page has an advertisement for the "Carousel", the night club owned & operated by Jack Ruby (see).
Given that this edition--despite being the day of the assassination--has no coverage of the event, there would have been no reason for it to be saved. As such this edition is extremely rare while being significant for the event what happened on that day in that city.
Complete with all 3 section an in nice condition.