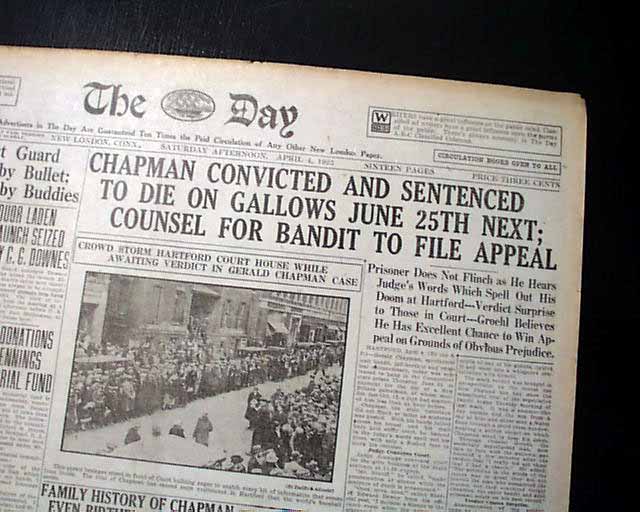 This 16 page newspaper has a five column headline on the front page: "CHAPMAN CONVICTED AND SENTENCED TO DIE ON GALLOWS JUNE 25TH NEXT; COUNSEL FOR BANDIT TO FILE APPEAL" and more with related photo (see photos). Other news of the day throughout. A few small binding holes along spine, otherwise in nice condition.

wikipedia notes: On October 12, 1924, while on a crime spree in Connecticut, Chapman murdered Police Officer James Skelly of the New Britain Police Department. He was then recaptured on January 18, 1925, in Muncie, Indiana, based on authorities being tipped off by informant Ben Hance. During his apprehension, Chapman fired at a police officer but missed. By this time the authorities wanted Chapman's crime wave ended. President Calvin Coolidge was convinced to reduce the robbery sentence of Chapman in Federal Prison to time served, and Chapman was then handed over to the Connecticut authorities.

Both Hance and his wife were found dead eight months later on August 11, 1925. Authorities suspected their deaths may have been attributed to Anderson in revenge for betraying Chapman to the police. On October 31, 1925 Dutch Anderson and Police Officer Charles Hammond confronted each other in a narrow ally in Muskegon, Michigan. In the ensuing gunfight both men were killed.