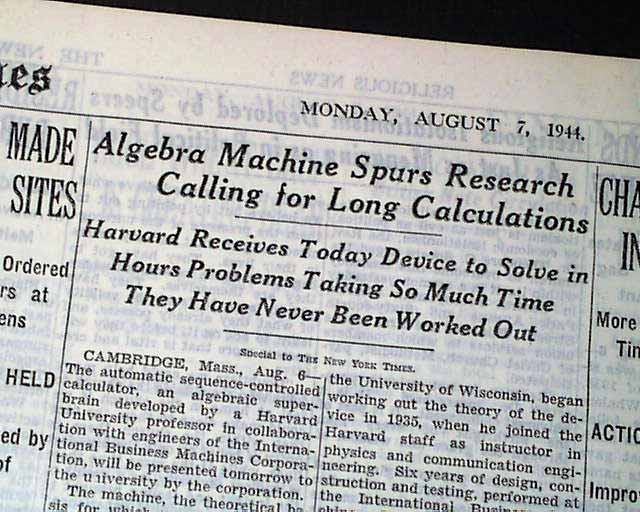 This 24 page newspaper has two column headlines on page 17: "Algebra Machine Spurs Research Calling for Long Calculations" and "Harvard Receives Today Device to Solve in Hours Problems Taking So Much Time They Have Never Been Worked Out".

The IBM Automatic Sequence Controlled Calculator (ASCC), called the Mark I by Harvard University, was the first large-scale automatic digital computer in the USA. It is considered by some to be the first universal calculator.

wikipedia notes: The electromechanical ASCC was devised by Howard H. Aiken, built at IBM and shipped to Harvard in February 1944. It began computations for the U.S. Navy Bureau of Ships in May and was officially presented to the university on August 7, 1944. The main advantage of the Mark I was that it was fully automatic—it didn't need any human intervention once it started. It was the first fully automatic computer to be completed. It was also very reliable, much more so than early electronic computers. It is considered to be "the beginning of the era of the modern computer" and "the real dawn of the computer age".