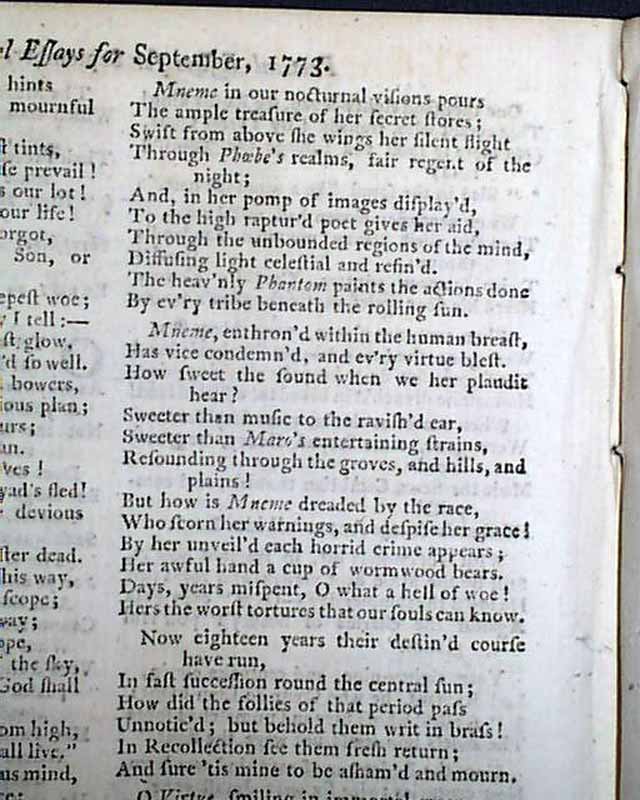 THE GENTLEMAN'S MAGAZINE London, September, 1773  Near the back is a printing of a poem titled: "On Recollection" which was written by the famed black poetess Phillis Wheatley. This piece also includes a brief biography of her (see).
Phillis Wheatley was the first published African American poet and the first African-American woman whose writings helped create the genre of African American literature. Born in Gambia, she was made a slave at age seven. She was purchased by the Wheatley family of Boston, who taught her to read and write, and helped encourage her poetry.
The 1773 publication of Wheatley's "Poems on Various Subjects, Religious and Moral" brought her fame, with figures such as George Washington praising her work. She appeared before General Washington at a poetry reading in March, 1776. She was a strong supporter of American independence, reflected in both poems and plays she wrote during the Revolutionary War (credit poemhunter.com).
A very rare opportunity for a period magazine printing of work by Phillis Wheatley.
Included are two foldout plate concerning: "Sharp's Rolling Carts" as well as one which includes the war canoe of New Zealanders (see). Some "American News" near the back as well.
Complete in 64 pages, 5 by 8 inches, full title/contents page featuring an engraving of St. John's Gate, very nice condition.