Home > Treaty of Versailles signed in 1919....
Click image to enlarge 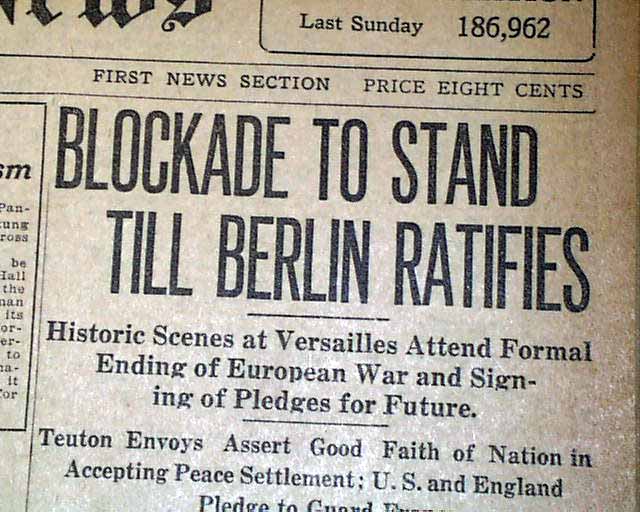 This 12 page newspaper has two column headlines on the front page that include: "BLOCKADE TO STAND TILL BERLIN RATIFIES", "Historic Scenes at Versailles Attend Formal Ending of European War and Signing of Pledges for Future" and more. 1st report coverage on the signing of the Treaty of Versailles which officially ended World War I.

wikipedia notes: The Treaty of Versailles was one of the peace treaties at the end of World War I. It ended the state of war between Germany and the Allied Powers. It was signed on 28 June 1919, exactly five years after the assassination of Archduke Franz Ferdinand, one of the events that triggered the start of the war. The other Central Powers on the German side of World War I were dealt with in separate treaties. Although the armistice signed on 11 November 1918 ended the actual fighting, it took six months of negotiations at the Paris Peace Conference to conclude the peace treaty. Of the many provisions in the treaty, one of the most important and controversial required Germany and its allies to accept responsibility for causing the war and, under the terms of articles 231-248, to disarm, make substantial territorial concessions and pay reparations to certain countries that had formed the Entente powers. The Treaty was undermined by subsequent events starting as early as 1922 and was widely flouted by the mid-thirties.

The result of these competing and sometimes incompatible goals among the victors was compromise that left none satisfied: Germany was not pacified, conciliated or permanently weakened. This would prove to be a factor leading to later conflicts.