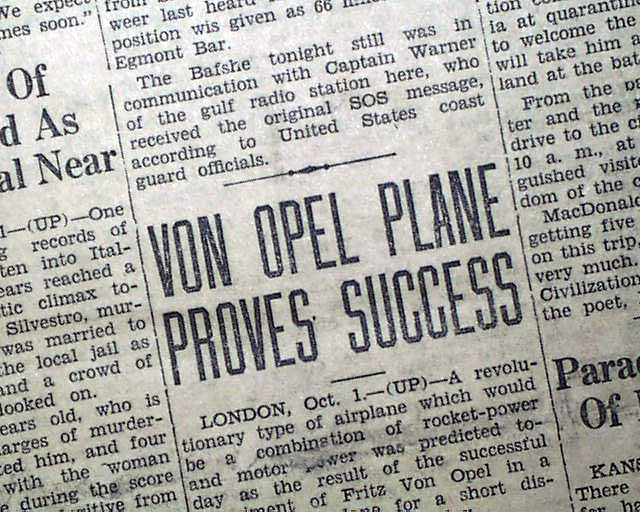 This 8 page newspaper has a one column headline on the front page: "VON OPEL PLANE PROVES SUCCESS". Coverage on the very 1st rocket plane flight.

Other news, sports and advertisements of the day. Light browning, a few small binding holes along spine, otherwise good.

wikipedia notes: Fritz Adam Hermann Opel, since 1918 von Opel (May 4, 1899 - April 8, 1971), was the only child of Wilhelm von Opel, and a grandson of Adam Opel, founder of the Opel Company. He is remembered mostly for his spectacular demonstrations of rocket propulsion that earned him the nickname "Rocket Fritz".

In 1928 he purchased a sailplane named the "Ente" (duck in German) from Alexander Lippisch and attached rocket motors to it, creating the world's first rocket plane on June 11. The aircraft exploded on its second test flight, before von Opel had a chance to pilot it himself, so he commissioned a new aircraft, also called the RAK.1 from Julius Hatry, and flew it at Frankfurt-am-Main on September 30, 1929.