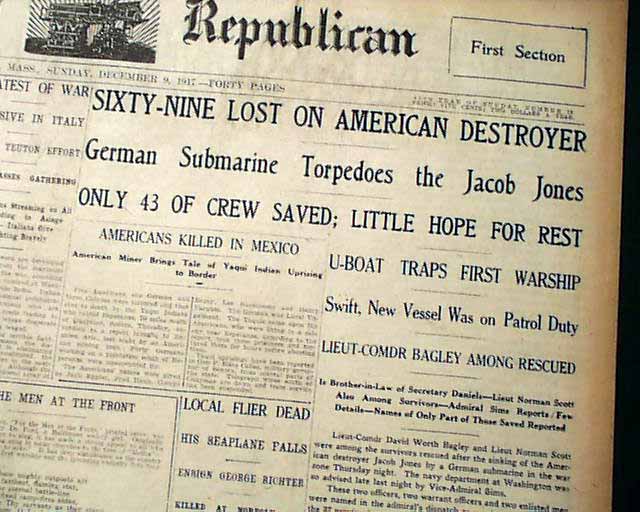 This 30+ page newspaper has a four column headlines on the front page that include: "SIXTY-NINE LOST ON AMERICAN DESTROYER", "German Submarine Torpedoes the Jacob Jones"
and more with subheads.

Other news of the day including front page reporting on the Halifax, Nova Scotia explosion.

wikipedia notes: After special escort duty between Ireland and France, she departed Brest, France, on 6 December on her return run to Queenstown. At 16:21, as she steamed independently in the vicinity of the Isles of Scilly, her watch sighted a torpedo wake about 1,000 yards (910 m) distant. Although the destroyer maneuvered to escape, the high-speed torpedo struck her starboard side, rupturing her fuel oil tank. The crew worked to save the ship; but as the stern sank, her depth charges exploded. Realizing the situation hopeless, Commander David W. Bagley reluctantly ordered the ship abandoned. Eight minutes after being torpedoed, Jacob Jones sank with 64 men still on board.

The 38 survivors huddled together on rafts and boats in frigid Atlantic waters off the southwest coast of England. Two of her crew were taken prisoner by attacking submarine U-53 commanded by Kapitan Hans Rose. In a humanitarian gesture rare in modern war, Rose radioed the American base at Queenstown the approximate location and drift of the survivors. Throughout the night of 6/7 December, the British sloop-of-war CamelliaTemplate:WP Ships HMS instances and British liner Catalina conducted rescue operations. By 08:30 the following morning HMS InsolentTemplate:WP Ships HMS instances had picked up the last survivors of Jacob Jones.

By coincidence, another U.S. destroyer of the same name, USS Jacob Jones (DD-130)Template:WP Ships USS instances, was also torpedoed and sunk by her own depth charges on 28 February 1942