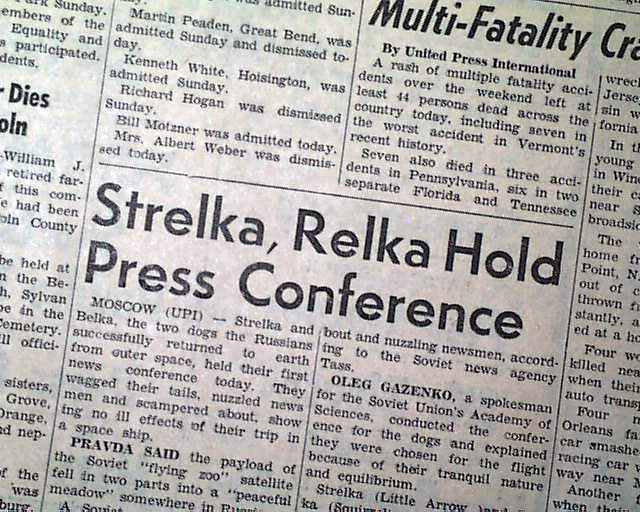 This 6 page newspaper has a two column headline at the bottom of the front page: "Strelka, Relka Hold Press Conference". This tells of the very 1st space flight to bring back animals still alive. (historic)

Other news of the day throughout. A few small binding holes along spine, otherwise in good condition.

They were accompanied by a grey rabbit, 42 mice, 2 rats, flies and a number of plants and fungi. All passengers survived. They were the first Earth-born creatures to go into orbit and return alive.

Strelka went on to have six puppies with a male dog named Pushok who participated in many ground-based space experiments, but never made it into space. One of the pups was named Pushinka and was presented to President John F. Kennedy's daughter Caroline by Nikita Khrushchev in 1961. A Cold War romance bloomed between Pushinka and a Kennedy dog named Charlie resulting in the birth of 4 pups that JFK referred to jokingly as pupniks. Two of their pups, Butterfly and Streaker were given away to children in the Midwest. The other two puppies, White Tips and Blackie, stayed at the Kennedy home on Squaw Island but were eventually given away to family friends. Pushinka's descendants are still living today. A photo of descendants of some of the Space Dogs is on display at the Zvezda Museum outside Moscow.