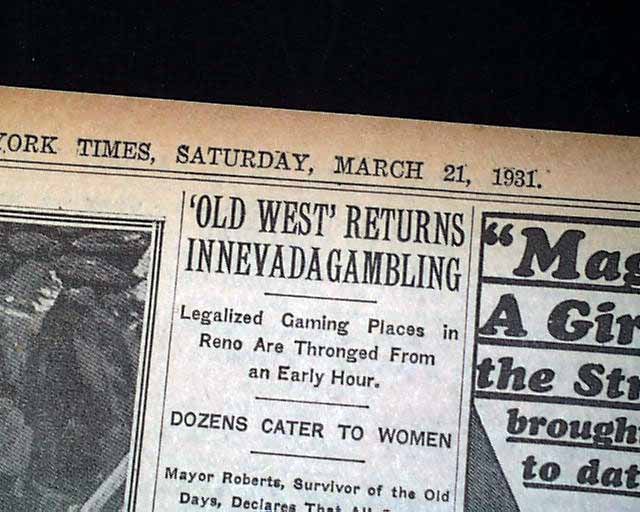 This 38 page newspaper has one column headlines on page 3: "'OLD WEST' RETURNS IN NEVADA GAMBLING", "Legalized Gaming Places in Reno Are Thronged From an Early Hour", "DOZENS CATER TO WOMEN" and "Mayor Roberts, Survivor of the Old Days, Must Be 'On the Square'".

A historic report on the legalization of gambling that would eventually lead to the business boom of the famous Las Vegas casino hotels.

wikipedia notes: Unregulated gambling was common place in the early Nevada mining towns but outlawed in 1909 as part of a nation-wide anti-gaming crusade. Due to subsequent declines in mining output and the decline of the agricultural sector during the Great Depression, Nevada re-legalized gambling on March 19, 1931, with approval from the legislature. At the time, the leading proponents of gambling expected that it would be a short term fix until the state's economic base widened to include less cyclical industries. However, re-outlawing gambling has never been seriously considered since the industry has become Nevada's primary source of revenue today.