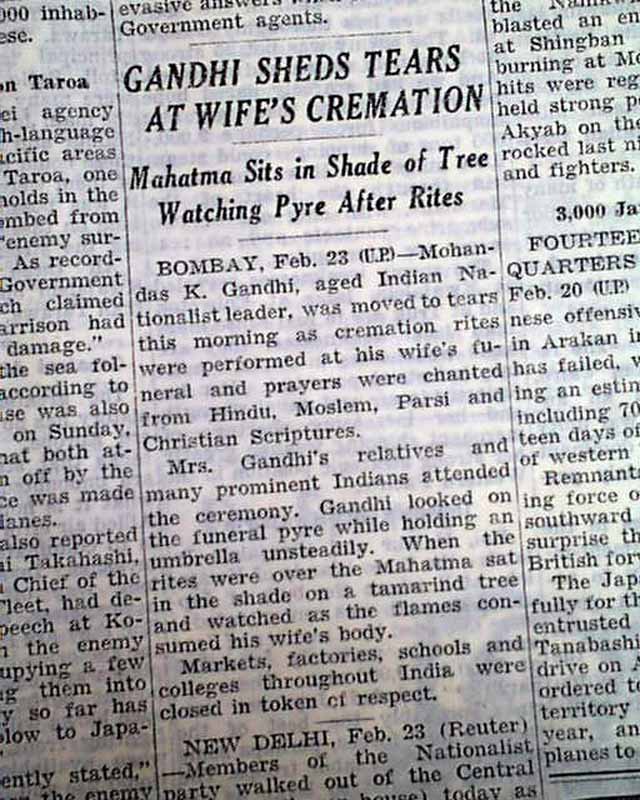 This 34 page newspaper has one column headlines on page 3: "GANDHI SHEDS TEARS AT WIFE'S CREMATION" "Mahatma Sits in Shade of Tree Watching Pyre After Rites" which tell of Gandhi's wife's death.

Other news of the day with much on World War II. Complete with 34 pages, and measuring 15 1/2 by 21 inches, this rag edition is in great condition.

wikipedia notes: Kasturba joined her husband in political protests. She traveled to South Africa in 1897 to be with her husband. From 1904 to 1914, she was active in the Phoenix Settlement near Durban. During the 1913 protest against working conditions for Indians in South Africa, Kasturba was arrested and sentenced to three months in a hard labor prison. Later, in India, she sometimes took her husband's place when he was under arrest. In 1915, when Gandhi returned to India to support indigo planters, Kasturba accompanied him. She taught hygiene, discipline, reading and writing to women and children.

Kasturba suffered from chronic bronchitis. Stress from the Quit India Movement's arrests and ashram life caused her to fall ill. After feeling very weak while in prison, she died from a severe heart attack[citation needed] on February 22, 1944. Kasturba fell ill with bronchitis which was subsequently complicated by Pneumonia. In January of 1944, Kasturba suffered two more heart attacks. She was now confined to her bed much of the time. Even there she found no respite from pain. Spells of breathlessness interfered with her sleep at night. Yearning for familiar ministrations, Ba asked to see an Ayurvedic doctor…

After conferring with the others (doctors) at Aga Khan Palace earlier that morning, Bapu has made a wrenching decision: “I think all medicines should be stopped. We should leave everything in the hands of God.” The doctors had agreed. …

Mahatma Gandhi and his son Devdas Gandhi had a fight over the treatment. Devdas had arranged for penicillin from Calcutta, but Mahatma Gandhi refused to give it to Kasturba as it had to be injected.[1] “Why do you want to prolong your mother’s agonies after all the suffering she has been through?” Bapu asked. Then, with utmost compassion, he said, “You can’t cure her now, no matter what miracle drug you may muster. But if you insist, I will not stand in your way.” Devadas bowed his head. He had no further pleadings to offer. The doctors looked relieved.[2]

After a short while, Kasturba stopped breathing.