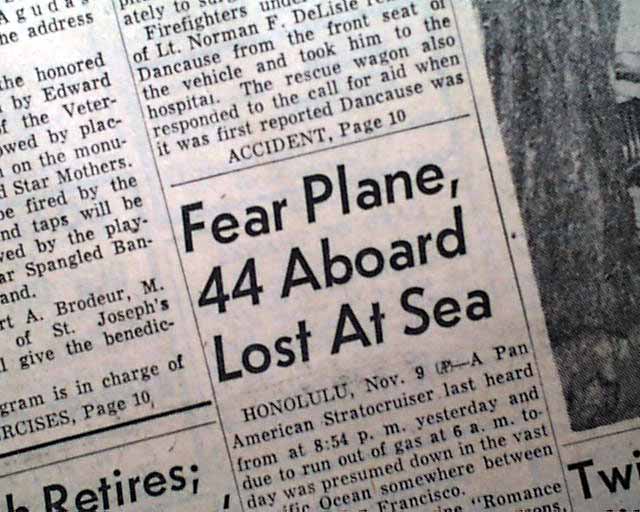 This 12 page newspaper has a one column headline on the front page: "Fear Plane, 44 Aboard Lost At Sea". This tells of Pan Am Flight 7 airplane disaster in the Pacific Ocean.

Other news of the day throughout. Minor margin wear, otherwise in good condition.

wikipedia notes: Pan Am Flight 7, registration N90944, Clipper Romance Of The Skies, was an around-the-world-flight originating in San Francisco that flew westbound with several stops before arriving in Philadelphia. On the morning of November 8, 1957 it departed San Francisco on its first leg to Honolulu, Territory of Hawaii at 11:51am PST. Last contact with the aircraft consisted of a routine radio transmission between the pilot in command and a US Coast Guard cutter performing radar surveillance duty at Ocean Station November located at the approximate halfway point between the mainland and Oahu. The flight never arrived in Hawaii.

"The New York Times" reported on Nov. 9, "The Coast Guard sent out a search plane to look for the airliner, which carried 36 passengers and a crew of eight. The Coast Guard also alerted crews of two cutters to be ready to take part in the search. United Press International (UPI) reported that the Navy submarines Cusk and Carbonaro were the closest vessels to the point where the plane was last reported and were diverted to the search. The last radio report from the plane came when Capt. G. H. Brown made a routine check."

Toxicology results performed under the auspices of the Los Angeles County Coroner's Office showed higher than normal levels of carbon monoxide in a few of the remain sets recovered that suggested, but did not prove, that carbon monoxide poisoning may have been a factor in the crash.

The definitive cause of the accident has never been determined. Present interest in the mystery of the Romance of the Skies includes speculation by friends and family of the flight crew that the plane may have been lost due to a malfunctioning engine, a disgruntled flight crew member, or part of an insurance related fraud that involved an explosive device placed aboard the aircraft.