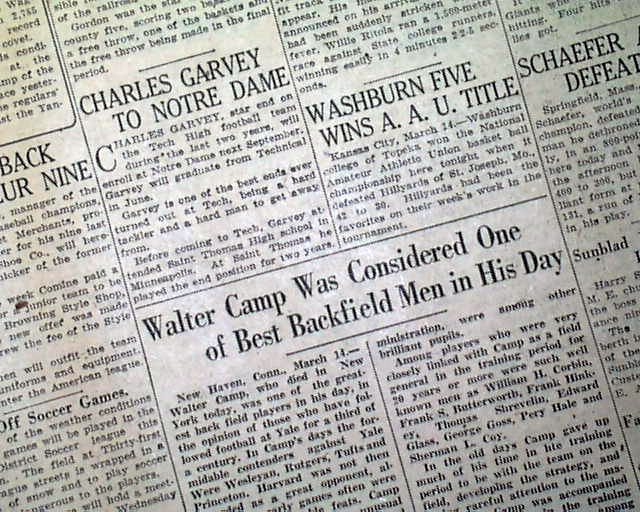 This 32 page newspaper has one column headlines on page 2 that include: "Walter Camp's Death Blamed to Over-Exertion" and more. See photos for text here.

Also the front page of the sport's section: "Walter Camp Was Considered One of Best Backfield Men in His Day"

wikipedia notes: Walter Chauncey Camp (April 7, 1859 – March 14, 1925) was an American football player, coach, and sports writer known as the "Father of American Football". With John Heisman, Amos Alonzo Stagg, Pop Warner, Fielding H. Yost, and George Halas, Camp was one of the most accomplished persons in the early history of American football. He played college football at Yale College from 1876 to 1882. Camp served as the head football coach at Yale from 1888 to 1892 before moving to Stanford University, where he coached in December 1892 and in 1894 and 1895. Camp's Yale teams of 1888, 1891, and 1892 have been recognized as national champions. Camp was inducted into the College Football Hall of Fame as a coach in 1951.