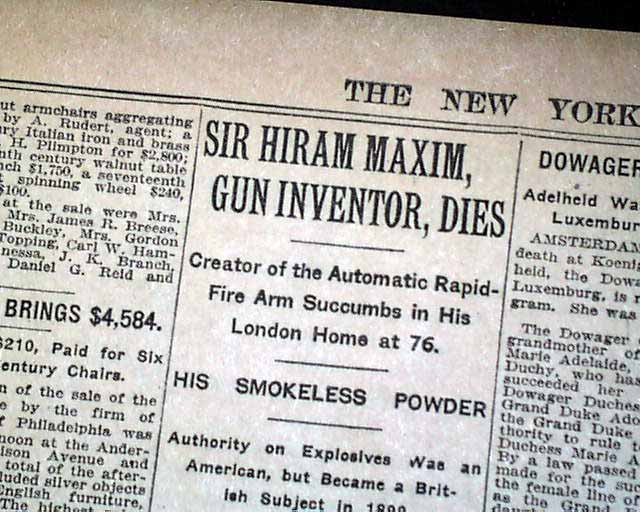 This 20 page newspaper has one column headlines on page 13 that include: "SIR HIRAM MAXIM, GUN INVENTOR, DIES" "Creator of the Automatic Rapid-Fire Arm Succumbs in His London Home at 76" and more. (see) See photos for text on the death of Hiram Stevens Maxim, creator of the Maxim machine gun.

Other news of the day. Usual browning with minor margin wear, otherwise good. Should be handled with care.

wikipedia notes: Sir Hiram Stevens Maxim (February 5, 1840 – November 24, 1916) was an inventor born in the U.S. who emigrated to England and adopted British citizenship. He was the inventor of the Maxim Gun – the first portable, fully automatic machine gun – and the ubiquitous mousetrap. He patented the first silencing device for a firearm, and laid a claim to inventing the lightbulb. He also experimented with powered flight, but his large aircraft designs were never successful. However, his "Captive Flying Machine" amusement ride, designed as a means by which to fund his research while generating public interest in flight, was highly successful.