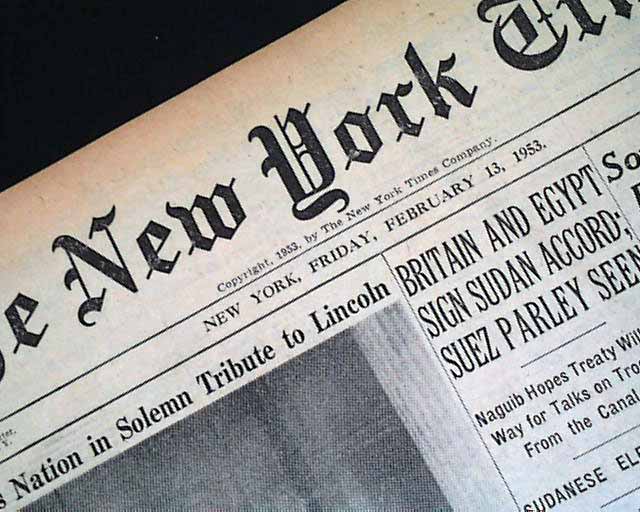 This 38 page newspaper has small one column headlines on the back page (page 38): "Miss Jorgensen Returns", "Ex-G.I. Back From Copennhagen 'Happy to Be Home'' which tells of the return of Christine Jorgensen to America after her famous sex change operations in Europe.

Other news of the day throughout including various advertisements. In good condition.

wikipedia notes: Returning to New York after military service and increasingly concerned over (as one obituary called it) her "lack of male physical development", Jorgensen heard about the possibility of sex reassignment surgery, and began taking the female hormone ethinyl estradiol on her own. She researched the subject with the help of Dr. Joseph Angelo, a husband of one of Jorgensen's classmates at the Manhattan Medical and Dental Assistant School. Jorgensen intended to go to Sweden, where the only doctors in the world performing this type of surgery at the time were to be found. At a stopover in Copenhagen to visit relatives, however, Jorgensen met Dr. Christian Hamburger, a Danish endocrinologist and specialist in rehabilitative hormonal therapy. Jorgensen ended up staying in Denmark, and under Dr. Hamburger's direction, was allowed to begin hormone replacement therapy, eventually undergoing a series of surgeries.

During this first round of surgeries in Copenhagen, Jorgensen was castrated. According to an obituary, "With special permission from the Danish Minister of Justice, Jorgensen had his testicles removed first and his still-undeveloped penis a year later. Several years later Jorgensen obtained a vaginoplasty, when the procedure became available in the U.S., under the direction of Dr. Angelo and a medical advisor Harry Benjamin.

Jorgensen chose the name Christine in honor of Dr. Hamburger. She became a spokesperson for transsexual and transgender people.

When Jorgensen returned to New York in February 1953, she became an instant celebrity. There has been serious speculation that Jorgensen leaked her story to the press, but in any case, the publicity created a platform for Jorgensen, who used her publicity for more than fame. New York radio host Barry Gray asked her if 1950s jokes such as "Christine Jorgensen went abroad, and came back a broad" bothered her. She laughed and said that they did not bother her at all. However, another encounter demonstrated that Jorgensen could be offended by some queries: Jorgensen appeared on an episode of The Dick Cavett Show, in which the host offended her by asking about the status of her romantic life with her "wife", and she walked off the show; because she was the only scheduled guest, Cavett spent the rest of that show talking about how he had not meant to offend her.