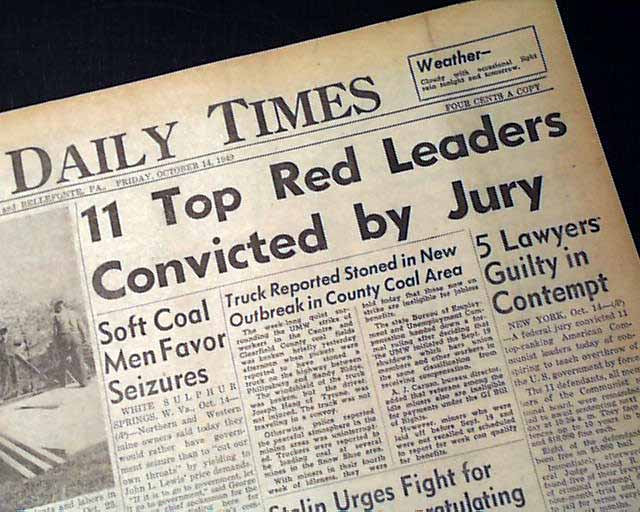 
CENTER DAILY TIMES, Bellefonte, Pennsylvania, October 14, 1949  This 12 page newspaper has a four column headline on the front page: "11 Top Communist Leaders Convicted by Jury", with subheads and supporting test (see images).  This conviction was a result of the Smith act of 1940.  Other news, sports and advertisements of the day throughout. Close cut along left margin (spine), otherwise good.

Members of the Communist Party USA (CPUSA) began facing prosecution beginning in 1949 under the law. Over 140 leaders of the CPUSA, including party leader Eugene Dennis, would stand trial during the early days of the Cold War. Prosecutions continued until a string of decisions by the United States Supreme Court threw out numerous convictions under the Smith Act as unconstitutional.

Eleven leaders of the Communist Party were charged under the Smith Act in 1940, including Gil Green, a long-time party leader; Eugene Dennis and Henry Winston, leaders of the national organization; John Gates, editor of the Daily Worker; and Gus Hall, leader of the party in Ohio. The accusation was that "they conspired... to organize as the Communist Party and willfully to advocate and teach the principles of Marxism-Leninism," which was equated with meaning "overthrowing and destroying the government of the United States by force and violence" at some unspecified future time. They were also accused of conspiring to "publish and circulate...books, articles, magazines, and newspapers advocating the principles of Marxism-Leninism." The Communist Manifesto by Marx and Engels, Lenin's State and Revolution, and Stalin's Foundation of Leninism were introduced as evidence for the prosecution.

After a ten-month trial at the Foley Square Courthouse in Manhattan, ten defendants received sentences of five years and $10,000 fines. An eleventh defendant, Robert G. Thompson – a distinguished hero of the Second World War – was sentenced to three years in consideration of his wartime service.[5] All the defense attorneys, including future Congressman George W. Crockett, were cited for contempt of court and given prison sentences.

The convicted Communists appealed the verdicts, but the Supreme Court upheld their convictions in 1951 in Dennis v. United States by a vote of 6-2, with Justices Hugo Black and William O. Douglas dissenting. Black wrote that the government's indictment was "a virulent form of prior censorship of speech and press" and a violation of the First Amendment.