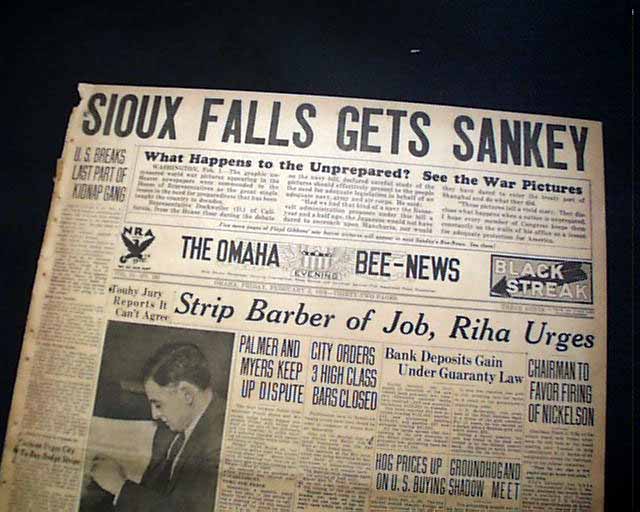 The front page has a great banner headline above the masthead on the front page: "SIOUX FALLS GETS SANKEY" with subhead: "U.S BREAKS LAST PART OF KIDNAP GANG" which tells of the capture of Verne Sankey.

Other news, sports, and advertising of the day. Complete in 32 pages with browning with some margin wear and chipping, otherwise good.

wikipedia notes: Verne Sankey (1890-February 8, 1934) and Gordon Alcorn were a pair of Depression-era outlaws whose successful kidnappings of Haskell Bohn and Charles Boettcher II in 1932 made them two of the most wanted criminals in the United States, and inspired a number of other kidnappings across the country. Their eventual capture was, in fact, a direct result of one of these copycat kidnappings, of which they themselves were wrongly accused. Sankey was initially a suspect in the Lindbergh baby kidnapping but was cleared after an investigation by the FBI.

On January 31, 1934, Sankey was captured by police and federal agents at a barber shop in Chicago, Illinois. He was returned to South Dakota to stand trial for the Boettcher kidnaping, being held at the state prison in Sioux Falls for added security; however, Sankey committed suicide before his trial by hanging himself in his cell with his necktie on February 8. Alcorn had been captured a week earlier and was sentenced to life imprisonment for Boettcher's kidnapping.